“Assault weapons must be banned because they are vastly more deadly!”

(It is equally believable that this was said by Everytown, MSNBC, or the crazy homeless person on the corner… it is getting hard to tell the difference.)

Are “assault weapons” inherently more dangerous that any other type of gun? I know ardent gunnies will go into deep discourse about the relative energy transfer potentials of sundry ammo types and rifle configurations. But thanks to the Gun Facts Mass Public Shooting database, we can make a quicker review. 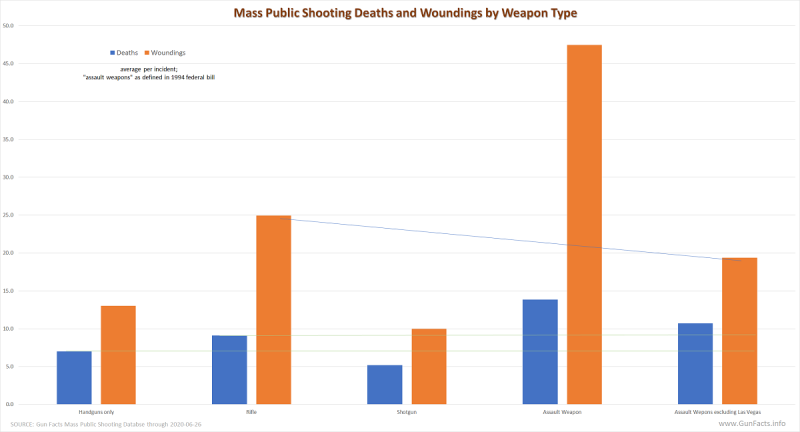 NOTE #1: “Assault weapon” is a legislative term, not a technical one. There are a plethora of “assault weapons” laws that cover everything from handguns to hunting rifles to Lord Knows What. So we use the 1994 Federal Assault Weapons bill definition since it is the only one that covered all of the United States.

NOTE #2: It is necessary to look at the data both with and excluding the infamous Las Vegas Country Music massacre, which was the most carefully planned “cattle pen scenario” event ever.

What we see from the data is odd but explainable. موقع رياضي

Rifles: The death rate for “assault weapons” (excluding Las Vegas) is marginally higher than for rifles in general (and maybe someday we’ll isolate out “assault weapons” and rifles that are not “assault weapons” – for now they overlap). The general lethality of a rifle round is barely changed depending on the type of rifle from which it is fired (to which the gunnies say, “Well, duh!”). Rifles, 9.1 deaths per incident, “assault weapons,” 10. كيف تلعب القمار 7.

Ignoring the overlap between the rifle and “assault weapons” categories, we can make one additional observation, and it involves planning.

Criminology and psychology literature show that MPSs are being more and more carefully planned, and that the “cattle pen scenario” is well understood by mass murderers looking for the infamy of “breaking the record.” That leads to this interesting table.

As you can see, the average body count for handguns outside of a cattle pen scenario is marginally higher than for rifles. This is understandable since it is easier to target, track and kill fleeing victims with a handgun.

Also we see that for cattle pens, the number killed is nearly identical for rifles (which overlap with assault weapons) and handguns. Taken in irrational isolation, one would conclude that rifles are not more deadly in MPSs.

But when we combine advance planning, a chosen cattle pen, and an “assault weapon,” the body count doubles. The question then becomes whether shooters selected the weapon type based on planning. We know that was the case in Las Vegas. Here is the give-away: the body count is higher for cattle pen scenarios for all types of firearms (handguns 2.1:1, rifles 2.2:1) but much higher for “assault weapons” (5.3:1).

And here is the proof point that shows why. For both handguns and rifles, there are seven cattle pen scenarios for every 10 non-cattle pens, a ratio of 0. كيف تربح في القمار 7:1. For “assault weapons” the ratio is nearly 1:1. This indicates that those who plan (and you have to plan for cattle pens) then often select “assault weapons” for the event. Given the light added death rate with “assault weapons” over rifles (and, again, some overlap) then the increase in the “assault weapon” death rate is not from the firearm used, but from the planning and location selected.