Michael Bloomberg, the avenging fallen angel for the gun control industry, is a progenitor of Everytown, the new gun control juggernaut. This organization has been the subject of scathing reviews given their habit of making statistical claims for which they do not cite their sources, or citing sources that are in effect gun control organizations.

In short, they are con(wo)men.

People interested in honesty concerning gun control (the Gun Facts mission) forward me Everytown emails. Of late, emails emanating from Everytown have devolved into the absurd. So, as a public service to those who like debunking political fraud (and have yet to read the book on modern propaganda analysis), here are some selected snippets from Everytown emails and a bit of backlash.

Make no mistake: They’re putting you, me, and an entire generation of our children at risk.

Bloomberg, consider hiring some better copywriters. I doubt even Sarah Brady would buy this bunk. Let’s break it down for everyone who might.

SHOOT FIRST: This is a veiled reference to stand-your-ground laws, which merely state that you are under no obligation to flee if attacked in public (which is the law of the land for when you are at home). That they assume self-defense is strictly a firearm issue shows Everytown’s political myopia. But nowhere in any stand-your-ground law is permission granted to “shoot first and ask questions later.” Indeed, people have gone to prison for doing so even when they had concealed carry permits (CCWs) and lived in stand-your-ground states.

Since the primary politico tool is fear, the very phrasing of this passage (and their other email missives) is to incite fear in the population, despite the ever declining rate of violence in America. !!! chart VC crime rate fall !!!

CRIMINALS AND THE SEVERELY MENTALLY ILL CAN BUY GUNS WITH NO QUESTIONS ASKED: Do I even need to comment on this? Does anyone support arming thugs and nuts? No, not even the routinely vilified NRA. How can anyone with functioning dendra make this claim (they can’t, which says something about the inner-cranial malfunctions of Everytown’s digital media managers). 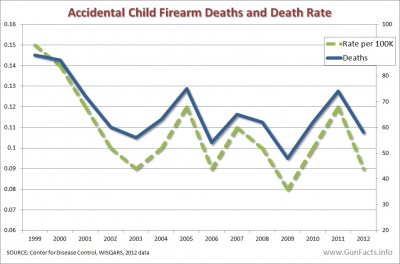 PUTTING YOU, ME, AND AN ENTIRE GENERATION OF OUR CHILDREN AT RISK: It is an ancient adage that anyone hiding behind children is either a coward or a conman. It is a political stunt as old as kissing babies, but with the opposite intention. The agitprop at play involves activating your millions of years of mammalian instincts to protect children by asserting (without evidence) that gun rights leads to child deaths. Thankfully, the Center for Disease Control – the official tally takers for all things fatal – tells us that child firearm death rates have been plunging while gun owner rights have been expanding.

In another mailer, with text I believe is attributed to the fellow who coined the slogan “not one more”) we are forced to read:

My son was shot and killed at UC Santa Barbara in May of this year. He died because of craven, irresponsible politicians and the NRA. 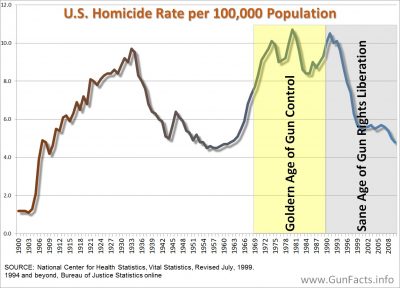 What this linguistic reprobate willingly omits is that support for gun control has been fading over the past few decades. Having experimented with the stuff for over two decades, and having seen violent crime soar during the same period, people got fed up with restrictions of their rights (as codified by the Second Amendment) and demanded them back. In effect, this craven front man for the gun control industry is telling everyone that politicians should ignore the will of their constituents. Correct me if I am wrong, but that is an oligarchy, not a democracy (how much do you want to bet he has a “Democracy Now” bumper sticker on his BMW?)

In yet another fundraising email, Everytown said:

There have been nearly 100 school shootings since the tragedy at Sandy Hook Elementary, and I’m pretty sure you’d agree that we can’t accept this as the norm. No other developed country in the world faces this challenge — and we don’t have to either!

The first bit about “nearly 100 school shootings” has been over-analyzed using Everytown’s own data. Among the offenses to science, their roster of “school” shootings includes:

Even the U.S. government doesn’t buy Everytown’s effluvium concerning school shootings. But what about those other developed countries? I rebut with one simple question: since these numbers are so low, into the statistical noise realm, why is Everytown worried about this? When you exclude death from when guns are misused (intentional homicides including gang warfare, suicides, a scant number of undeterminable causes) and properly used (legal interventions) we see only 81 people of public school years die from guns, regardless of the location. Accidents involving transportation kill 45 times as many kids, many near schools, but Everytown is campaigning for better traffic enforcement?

If people respect science and the truth, they need to shutdown Everytown, for they are not interested in the same.