America doesn’t have a gun problem, but it sure as heck has a gang problem.

When the gun control industry starts complaining about American gun violence, they never mention gangs. When someone (like me) mentions gangs to gun control advocates, they dismiss gangs as a non-issue. As someone who has lived next door to Oakland, California I can attest that it is very much an issue (as it is in Barack Obama’s own Chicago).

Yet it is very different in America. “European cities lack the strong gang traditions that exist in some large U.S. cities,” was how one study summarized the situation. 1 “Hence [European] gangs tend to be less territorial.” In short, gangs elsewhere are little like gangs here.

But despite every beat cop in major metropolitan towns noting that gangs are a big problem, some politicos won’t budge. So I decided to provide some perspective – to present some data on just how big and different America’s gang problem is, and hence their misuse of firearms (about 90% of gang homicides are committed with guns).

The tracking of gangs across the globe is at best a hodgepodge of roughly similar definitions and either no measurement or reporting. Finding hard numbers is nearly futile. But after a few hours of molesting Google, at least we have the start of a picture.

WARNINGS ABOUT THE ANALYSIS TO FOLLOW: Do not take the following research as robust. Reporting on the number of gang members in any region was sparse, varied by the year of publication, and often did not clearly delineate data. But there was enough to get some perspective, and for now that will do.

The international criminology world has more or less agreed that there are a few types of gangs worth studying:

STREET GANGS: This is what Americans worry about most – Bloods, Crips, MS-13, etc.

OUTLAW BIKER GANGS: Though much smaller in number than street gangs in the U.S., the relative lack of street gangs elsewhere makes biker gangs proportionately larger.

ORGANIZED CRIME GANGS: We have not included these because they are not typically sources of random violence.

PRISON GANGS: Also not included in the analysis since when you are locked up, you can’t cause violence in anyone’s neighborhood.

One problem with cross-national gang comparisons is that the best numbers available are estimates. Gang members rarely queue to answer surveys, and thus the numbers are the best guesses that criminologists could devise. 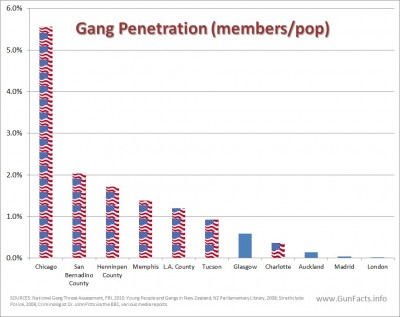 When we chart the handful of cities for which I could rapidly identify data on gang populations (and note that many countries and cities don’t report gang statistics because gangs are not a significant problem for them), we begin to see the scope of the issue.

When compared to non-American cities around the globe, we see the average gang membership penetration rate to be over nine times as much as overseas. Chicago’s gang penetration rate is 278 times higher than London’s (5.56% vs. 0.02%).

Based on raw numbers alone, and given that all street gangs tend to have violent/sociopathic behaviors, we expect the American violence rate in major metro areas to be proportionately higher (adjustments required for local portion of population being in gangs).

This agrees with the FBI’s findings. Their 2011 National Gang Threat Assessment indicates that 5% of the typical male street gang age population (age 15-24, using the Census Bureau age brackets) are in street gangs. Compare that with say Glasow which sports a mere 0.6% participation rate for the entire city, not just young males.

But this isn’t the whole story. American gangs have a deserved international reputation for “a bit of the old ultraviolence.” According to the FBI’s 2011 National Gang Threat Assessment:

Compare this to the snippet we read before: “European cities lack the strong gang traditions that exist in some large U.S. cities.”

So, America has a higher concentration of gang members, and they are vastly more violent than elsewhere. We also know from various government reports that gang violence is by-and-large a big city issue (you know, those same big cities where the mayors do nothing to control gangs but advocate gun control). The FBI in their National Gang Threat Assessment said it simply enough:

“Larger cities and suburban counties accounted for the majority of gang-related violence and more than 96 percent of all gang homicides.”

The American issue then is gangs and their guns. So the first question anyone should ask is if there is a legislative solution to the problem of gangland gun violence.

The FBI doesn’t think so. From their National Gang Threat Assessment, the FBI concludes:

Strawman purchases have been illegal for decades, and theft has always been so. Universal background checks suddenly sound oddball.

The policy then is to break gangs and the recurring cycle of gang recruitment. This is not a simple task, but it addresses the disease and not the symptoms. It goes to the heart of most violence in America and to the communities most affected by that violence. Gangs are our priority.

The Small Arms Survey has a little info on this. In one report concerning gangs, they say (and I paraphrase) ‘Gangs are a small part of the population, but an over-sized part of violence. Hence, gangs and their behaviors are part of the solution set.’

They also had a table of sorts in one publication 2 that reported some gang membership estimates by country. The list is far from complete, missing most of Europe. I only replicated a few for perspective sake.

Key to perspective is the nations lauded for their alleged non-violence also have nearly non-existent gang membership rates. The United States is closer to Columbia and Honduras in gang participation than Japan and England.

The same report also notes that there is “no doubt that
gang members are much more likely to be armed than most young people.” One survey 3 reported that gang member gun ownership rates to be above 77%, and likely higher due to the fear of some convicted felon gang members to truthfully report ownership/possession to anyone.