What portion of America’s guns are used in crime?

For years people have been taking estimates of the number of guns in public hands and dividing that into the number of gun crimes committed each year, to get a rough guess as to whether being “awash” in guns creates a problem. Typically, these rough takes estimate that less than 1% of guns are used in a crime any year.

The problem is that this is a radical over-estimate.

We know from sundry criminology studies that people who commit crimes tend to commit more than one. Your garden variety street gang member might murder quite a few rival gang members before being killed himself. Someone making a profession of robbing liquor stores isn’t likely to stop after the first attempt.

The answer is that we don’t and can’t know. Not fully, anyhow. But we can approximate two types of violent crime and at least get a ballpark idea.

This study has many limitations, so you should use these numbers as SWAGs (scientific wild ass guesses). Here are some of the issues we faced:

CRIMINALS DON’T TELL: Various small studies have estimated some levels of repeat crimes. But the bigger the crime, the less likely the offender will be to admit other crimes they committed (e.g., a jaywalker may brag about 100 offenses, but a street gang member goes silent when interrogated about homicides they are suspected of committing).

ONE GUN, TWO GUN, THREE GUNS? Likewise, the odds of keeping a gun you committed murder with might drop, while a gun used for an ATM robbery might be kept. Hence, the actual “gun repetition” rate is variable.

SOME STATS DON’T EXIST: The FBI’s Uniform Crime Reporting system will tell you how many aggravated assaults involved a gun (about 18% of them) but nobody has a handle on how many people who commit an aggravated assault on Tuesday did so on any other day of the year (we pinged a well-known and respected criminologist while hunting for such data and he had nada).

But buried in files both dusty and digital, we at least had some data to triangulate likely repeated gun use for homicides and robberies (assaults had no data, and guns are so seldom used for rapes that we omitted it from the analysis). We also had to make a few assumptions along the way, but nothing as radical as policy groups do while pushing their agendas. Ahhh, the luxury of being non-aligned, as the Gun Facts project is …

Cut to the Chase

The table at right shows steps and assumptions, which we’ll explain as we go. 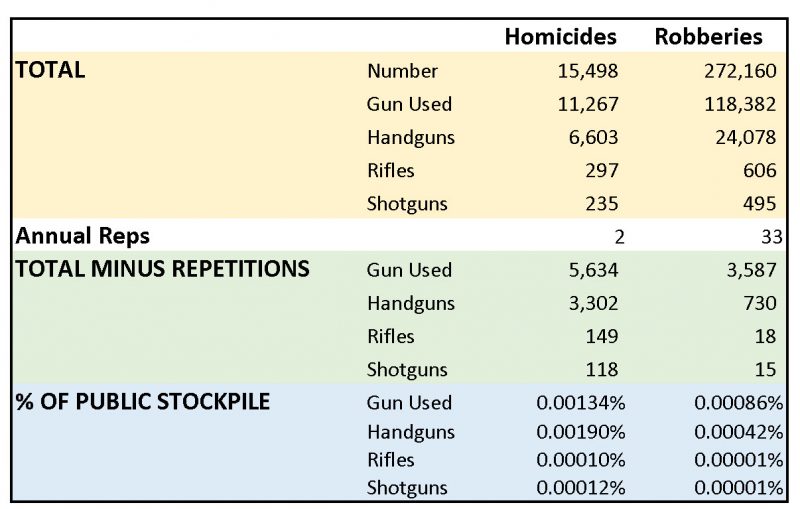 Foremost, and perhaps most important, are the estimates of the number of guns in circulation. In the United States, we do not know. Since gun registration – outside of a few states – is anathema to Americans, there is no tracking. At the Gun Facts project, we lean on previous criminology estimates 1 and those generated by the U.S. Government 2 and augment those annually with fresh data from the BATF’s Firearms in Commerce reports.

As a sanity check, we compared our tracking estimates with a somewhat outdated estimate from the Small Arms Survey. Their guess came in at about 93% of our data. Imperfect, but at least in the same minefield.

The bigger problem was knowing how often a hoodlum repeated their offenses with a gun.

One academic study 3 helps, though their data was compiled by convictions. It is a sad fact that some people get away with murder. Happy fact, some murderers get murdered themselves (spend five seconds studying street gang beefs and you’ll see this is common). When weighted for the number of additional homicides committed by a prisoner, we see shy of +1 homicides for each. However, that is for all homicide prisoners. As we know from gang studies, many gang members never make it to prison, taking the express route to the grave. Law enforcement in some gang-heavy regions have estimated that every gang member arrested for a homicide is the prime suspect in three other homicides. So, we at the Gun Facts project split the difference between these two boundaries and assumed that on average, everyone who committed one homicide committed another (two total).

The data on robberies was a bit clearer, but the study we found 4 was from only three states, albeit large ones (California, Texas, Michigan). In this study, they found robbers to be quite prolific, committing an aggregate of over 33 robberies in a year. Hence, we assumed that this rate translates well for all 50 states (and given that the spread for these three states was between 14 and 44 robberies per inmate, it isn’t too terrible of an assumption).

The top row (TOTAL) are the raw numbers for guns used in crime for 2018. Next are the triangulated aggregate repetition rates for these crimes (e.g., how many times did the average murderer or robber commit a murder or robbery in a year). The next row (TOTAL MINUS REPETITIONS) factors the repetition rate into the total “gun used” numbers to estimate how many unique guns were likely used in crime (assuming the same thug uses the same gun for each of their crimes). Lastly, we divide the unique crime gun use rate by the estimated stockpile of each type of gun to see what percentage of the American private arsenal is involved in crime.