As any good researcher would, I waited a few days for most of the relevant information about the Route 91 Massacre to emerge. I await the police report before making too many conclusions. But enough is now known to see some old and new issues with this mass public shooting.

Summary of the important Route 91 Massacre

The killer (I decline to repeat his name) thought this attack through very well. This is an important variable for two reasons.

First, he planned a scenario not only for maximum carnage but also to forestall his own capture or “death by cop”. When anyone puts a lot of thought into such, odds of preventing mass murder go way down.

Second, the approach to the killings was sadly quite brilliant. If the goal was to kill as many people as possible, with the highest probability of success, the venue and staging could hardly be better. In the history of mass public shooting, it was quite a feat.

Most “successful” mass public shootings, as defined by killing large number of people, occur in what I am today naming “cattle pen” scenarios (being a former cowboy, the analogy is inescapable). People trapped in a confined space allow a shooter:

The shootings at Virginia Tech (VT) and the Aurora, Colorado movie theater are good case studies, but also illustrate why Las Vegas was different. At VT, the killer intentionally trapped students in by chaining doors closed, then selected specific classrooms that allowed only one exit, which none dared run toward since the shooter was firing from there. In Aurora, there were more escape options, but for many those were effectively blocked in the panic.

Here is why the Route 91 Massacre was different:

The Las Vegas killer did not need to be physically close. He did not need to be a good shot. Any bullet fired at the crowd was going to hit someone. His only goal was to fire as often as he could, and he was guaranteed a high body count since nobody could move much less scramble out the exits or climb the fences around the venue.

This bit is more important than the weapons used, the accessories on the guns, or any other factor. The killer had an unobstructed line of fire on 22,000 people who could not budge. A similar scenario played out at the Pulse Nightclub shooting where 320 people were in a room with a capacity for 300. In Orlando and Las Vegas, we had very specific “cattle pen” situations. 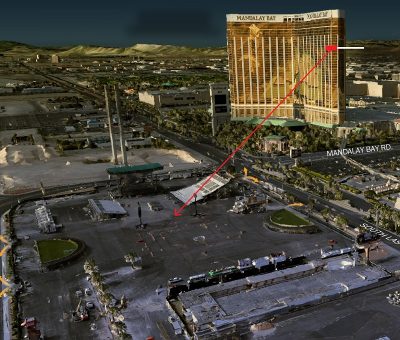 As important perhaps was the lack of any viable cover. As the photograph shows, there were very few places to which 22,000 people could. At VT, at Aurora, even at Sandy Hook, people could hind behind chairs and podiums. In Las Vegas, there was literally nowhere to hide … even if you could rapidly move through 22,000 other people.

SIDE NOTE: Having visited Las Vegas on business many times, I have feared it to be a high-priority terrorist target. The FBI and DHS agreed long before the Route 91 Massacre. 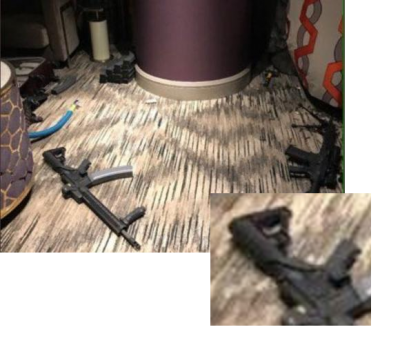 As of this writing, police have not confirmed that the rifles used for the Route 91 Massacre were augmented with “bump stocks“. But given the rapid fire sounds heard on video taken at the concert, and that 12 of the recovered rifles had them, odds are this played into the body count statistics.

Initial police reports suggest that the killer fired for a solid eleven minutes.  Even given reload times, catching ones breath, checking the spy cameras staged to warn of police approaching, bump stock equipped rifles could easily unleash over a thousand rounds (assume four rounds [though one maker claimed 14 rounds per second was possible] per second over eleven minutes would be 2,640 rounds … then reduce for reloads, panic attacks, malfunctions, etc.).

I’ll await the full police investigation, but I am willing to wager that most of the deaths occurred in the first minute, when the crowd was elbow-to-elbow. This may be more of a factor than the rate of fire, though the number of expended rounds certainly affected the casualty count.

It is premature to draw any conclusions, but some reports indicate that the killer was on or withdrawing from anti-anxiety medications.

Many medications prescribed for mental health conditions have unusual side effects. In fact, the Columbine High School killers claimed they were purposefully going through a cold-turkey withdraw from one class of medications to amp-up their rage, that withdraw symptom being well known.

The Las Vegas killer had reportedly been on at least one medication with the following withdraw side effects:

That’s for withdraw. People still on the drug may also be prone to:

We should wait for toxicology reports to be published and for any evidence of the killers discontinued use of the drug, but this may be an exacerbating factor.