When both economists and criminologists think that concealed carry either decreases or does not change homicide rates, we may have scientific consensus.

Both economist and criminologists study crime. They take different views of it, the former examining crime as a rational response to risk and opportunity, and the latter from a legalistic and bureaucratic process.

This caused economist John Lott and criminologist Gary Mauser to team-up and survey their peers on a small set of gun related issues. 1 The goal was to see if there was a general agreement about some gun policy, and if the two camps differed greatly.

The short story is that both camps largely skew in the same direction on all questions, and their joint direction shows that guns and concealed carry licensees do not create a problem, and may well decrease violence. Interestingly, economists (who, frankly are a bit better at statistical analysis than criminologists) find guns to be a net societal good, more so than criminologists. As Lott and Mauser summarized in the report:

Researchers, as a group, believe that guns are used more in self-defense than in crime; gun-free zones attract criminals; guns in the home do not increase the risk of suicide; concealed handgun permit holders are much more law-abiding than the typical American; and that permitted concealed handguns lower the murder rate. All those results were statistically significant. 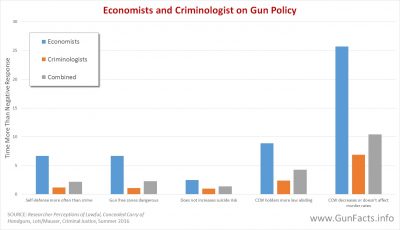 Immediately, we notice that economists and criminologists believe that concealed carry does not increase homicide. More than any other topic, the alignment between people who crunch a lot of numbers on this subject is compelling. 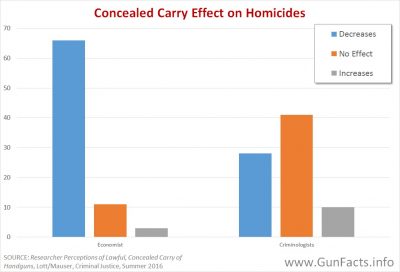 Ponder that for a moment. Aggregated, 73% of these professionals believe that concealed carry is good or at least not bad, and only 7% think otherwise. A more ringing endorsement cannot be found outside of an NRA convention.

Another interesting consensus, and as important to people murdered in movie theaters and bars, is that a full 55% of these researchers know that “gun free” zones are more likely to attract the kind of people who might shoot up the joint than keep them away (another 24% think lunatics don’t care much either way). Pair this with their opinions on CCWs stopping homicides and that guns are more often used in self-defense than in crime, and we see a clear picture: not preventing people from carrying firearms in public is a good idea.