North Carolina is thinking about ending its Jim Crow era law requiring a permit to purchase a handgun.

Naturally one side claims that an Armageddon of gun play will follow. The other side is saying “Oh, calm down, you Dixiecrats.”

Who is right can be demonstrated with surprising ease.

The Purpose and Unspoken Purpose of Handgun Purchase Permits

The common justification for purchase permits is so that the local constabulary (typically the county sheriff) can ensure that only non-criminal types can obtain a permit and thus buy a handgun at retail outlets (gun stores today, hardware stores back when many of these laws were originally enacted). Most states went further and disallowed private sales of handguns without a permit, often enforced by also requiring the private sales to be facilitated by a federally licensed firearm dealer (FFL).

But we also have to accept that in many instances the laws were enforced mainly upon anyone of color or recent immigration status. In North Carolina, the state currently considering abandoning purchase permits in favor of the National Instant Criminal Background Check System (NICS), the degree of post-Civil War racism was a tad high, as handily demonstrated by the Confederate governor after the war. And it was not restricted to the south – historian Clayton Cramer possesses a California curiosity, an opinion piece that noted the lack of a “keep and bear arms” clause in California’s constitution was intended so that Mexicans and Chinese people could be controlled.

But back to the cause and effect of permitting laws. The stated purpose was to reduce gun crime by keeping bad people from buying guns. A nice theory, but one that has never held up due to the non-retail means for acquiring firearms. As the Bureau of Justice Statistics reports every decade or so, a rock-bottom 40% of crime guns come from “street” sources, which are completely immune to permits, background checks and racist interventions. Contrarywise, a mere 11% of crime guns are acquired as retail purchases.

But let’s not speculate. Let’s look at firearm homicides – the best indicator of gun violence – comparing states that have purchase permit laws and those that do not.

MINOR CAUITIONARY NOTE: Rhode Island has such a law, but our researchers, a friendly lawyer, and three Rhode Island state representatives could not determine the year in which The Plantation State enacted their law. Considering that Rhode Island has a mere 0.3% of the nation’s population, it is not a statistical sin to drop them from the analysis. 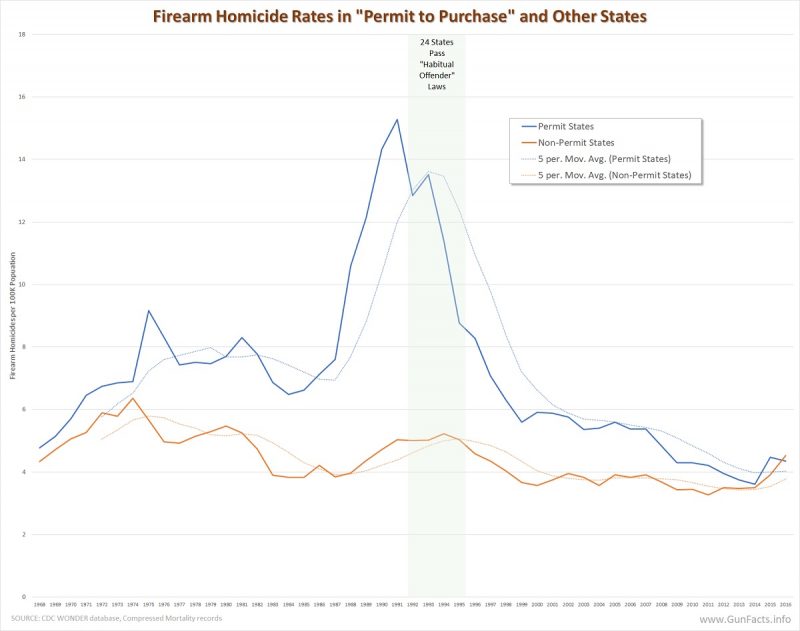 The lack of efficacy for handgun purchase permits is hard to understate. But we have to factor in one major external element to fully understand the situation.

This data alone is fairly compelling because there were 42 and 44 states lacking handgun purchase permits, and many of these states were high-population states, which had major metro areas and other factors associated with violent crime.

Between 1992 and 1995, 24 states enacted “habitual offender” laws. Some were gun violence specific (e.g., 10-20-Life laws) and others were more general (e.g., Three-Strike laws). The suppression of violence by these laws is inarguable, but it makes post-1993 analysis a little tedious. What can be said is that it took 20 years for states with handgun purchase permit laws to catch up to the already low and gradually falling firearm homicide rates of states lacking those permit laws.

In short, handgun purchase permits appear to do nothing to reduce firearm homicides, and it could be argued that they might well encourage them. I won’t argue that, because the case of North Carolina shows us something different and compelling. 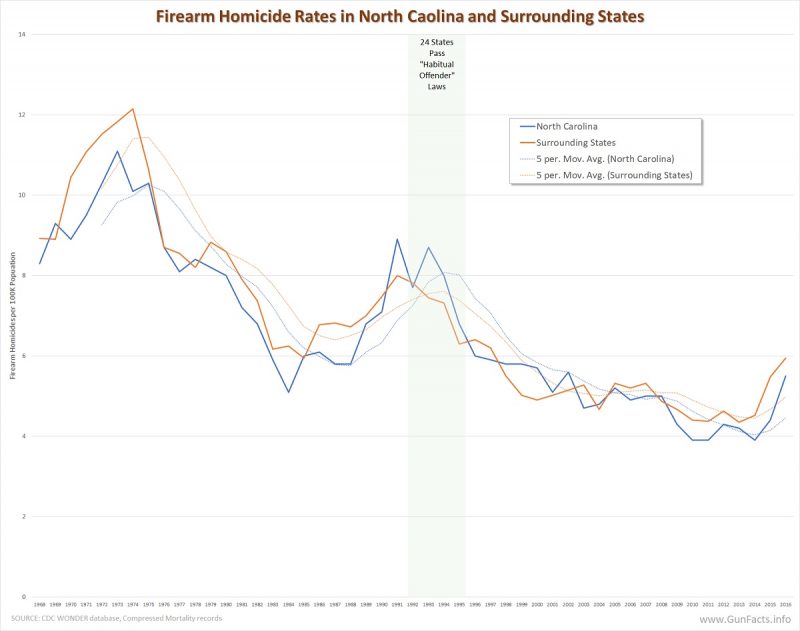 Since regional culture is more indicative of attitudes toward violence than mere handgun possession, comparing North Carolina to its neighboring states is illuminating.

As we see, the rates of firearm homicides between North Carolina (handgun purchase permit) and each state it touches (no permits) are closely aligned (an R2 value of 0.91 for the statistics junkies). If permits made any significant difference, the data would show wide gaps. And this analysis is a little loaded in favor of North Carolina since Virginia is a neighboring state and northern Virginia endures bleed-over violence from Washington, DC, which is routinely America’s murder capital.

The good people of North Carolina will suffer no harm by eliminating the handgun purchase permit laws because, statistically speaking, it has done them no good.