Five states require no permit to carry a concealed handgun in public. Twenty more are considering it.

Needless to say the gun control industry is apoplectic. They are riled as they have not been since states started following Florida’s lead and passing shall-issue, permitted concealed carry throughout the 1990s. Back then the gun control industry said permitted concealed carry was a terrible idea, and watched as violence rates dropped nationwide. Today they think permitless (constitutional) carry is a bad idea.

For them it is a bad idea, because it is proving to be a non-problem.

Currently four states have had permitless concealed carry laws enacted long enough to see what, if any, effect it might have in terms of violent crime. Kansas just passed their permitless carry legislation, so it is too soon to see if tornados kill more folks in Kansas than people packing pieces. Arkansas’ permitless carry law became effective in 2013, which is the latest year for data on firearm homicides, and thus we can’t measure any impact. But we can look at the other states, compare them against national numbers, and see if the gun control industry is wetting their knickers for no good reason (spoiler alert … they are).

Currently, Arizona, Alaska, Wyoming and Vermont require no permit for non-felons to carry a weapon concealed in public (like all other states, felons are prohibited from being in the same zip code as a gun, much less tucking one in their waistband).

Vermont is a tickler. They simply never bothered to outlaw the practice. In fact, most states didn’t outlaw concealed carry until the 1800s, and a fair bit of those restrictions were only enforced against selected minorities … mainly freed blacks.

These four states, excluding Vermont, enacted their permitless carry laws between 2003 and 2011. Thus, we can examine their firearm homicide rates before and after the laws came into effect and see what problems permitless carry may have caused.

Problems With The Data

Wyoming and Vermont are vexing. People in Big Sky country tend not to commit many homicides and the people in Vermont seem to dislike it all together. Thus when we look at a chart with Wyoming and Vermont, we see Wyoming’s firearm homicide rate leaping from nada to infinity (I had to put a dummy value in for the base year to even graph the chart properly). So it is wise to take Wyoming out of the analysis as the numbers would be inaccurate (and the Center for Disease Control’s mortality database makes note that Wyoming’s firearm homicide rate is so low that even the raw numbers cannot be believed entirely).

Vermont we can keep in because zero is zero. The CDC reports that Vermont residents are too frozen solid to point a gun at anyone.

Of the remaining states, we had to truncate pre-enactment data by a year given that the CDC’s primary mortality database only goes back to 1999 (I could have dug another year of data from their older database, but felt it likely wasn’t necessary given that we could still map a five year trend before permitless carry coming into force). Because Arizona made permitless carry available in 2010, we have only three years of data after that to which we can compare other states and the nation.

As for a national comparison, we had a bit of a poser. We could compare each state to the national average for their years, or try to aggregate them all. Since two of the three states that enacted permitless carry this century were only a year apart (2010 and 2011), we used 2010 as the baseline for nationwide averages. We did the same with Vermont since that improves the apples-to-apples comparison and helps make some sense of any underlying trend). 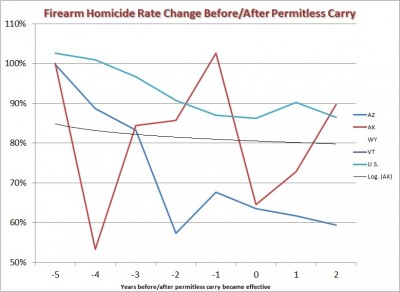 We start to see a downward slope in firearm homicides in permitless carry states (sans Wyoming, which we do not display due to their zero-base homicide rate and the resulting nonsensical comparison). Even Alaska, which also has significant fluctuations in firearm homicides, shows a downward trend. But the United States as a whole also has a downward trend (helped I suspect by the significant decline in concealed carry states, permitless or otherwise). 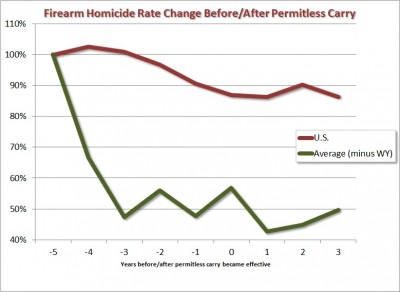 The outcome is quite compelling. Though firearm homicides dropped 13% across the country, they fell 50% in permitless carry states. Most of the fall in permitless states occurred before permits were obviated. Yet the overall firearm homicide rate dropped another 19% in the first two years after enactment while the rest of the nation didn’t drop at all.

This does not prove that permitless carry caused a radical reduction in firearm homicides, but it does disprove claims by the gun control industry that the streets run red with the blood of innocents once permits to carry concealed firearms are no longer required.

Is this even worthy of comment? Felons already disobey laws that prohibit them from possessing or carrying firearms concealed. They carry concealed in Detroit, Chicago, Philly and all the other dangerous cities where concealed carry is more or less verboten.

This make even less sense. Cops never know if they are dealing with a prohibited person or a law abiding citizen until they engage them. Cops, as good as they are, are not omnipotent. They don’t even know if someone is carrying until they ask or see a distinctive bulge. Thus a law enforcement officer’s awareness isn’t changed one iota with permitless carry. 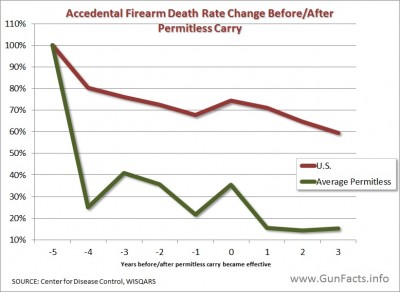 So far neither has been the case. We already covered homicides, one form of “intentional shootings”. The other type is legal interventions, one purpose behind being armed in public (though in practice one normally need not shoot their attacker … merely sticking a snub nose up their nose is enough).

But even accidental shootings (public and at home, which are merged herein since I don’t have a handy, state-by-state source for only public shootings) have declined much more rapidly in permitless carry states than for the nation at large. Total accidental shootings should be a good proxy for public accidental ones since the major change being measured is a change in public carry.

There must be some heavy drinking going on at offices of the gun control industry, because this makes zero sense, even to the senseless. If someone can explain how law abiding citizens (non-felons), carrying firearms in public will encourage felons to traffic guns into or out of those states, please send that explanation to me along with your prescription …  I really want to know, and to know what medications make people hallucinate like that.

Granted, less than 10% of states being permitless carry states makes for a fragile model. But early analysis, and given the lack of carnage that shall-issue permit-based concealed carry created, it appears that at worst no harm comes from permitless carry, and it may well be driving bad actors to not use their guns as often.