In August of 2022, half of the states in America will (or did, depending on when you read this) switch to “permitless carry,” which means residents (and, depending on the state, occasionally non-residents) can carry firearms concealed in public and not have to obtain a permit first.

Naturally, this scares some people. So, with seven states currently having been permitless long enough for analysis, it’s worth seeing if the fear is warranted.

Our objective is to see if states switching to permitless carry have a noticeable change in the homicide rates. 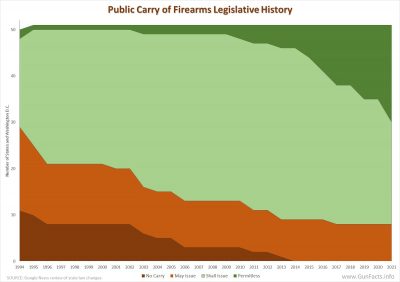 This may sound like the picking of nits, but as this chart shows, the public carry mix is constantly churning. As such, a newly minted permitless state might be compared to a different number of “shall issue” and “may issue” states, than the next state that adopted permitess carry.

For newcomers, this is the breakdown of public carry types:

MAY ISSUE: You can get a public carry permit if the police let you, but it is up to them.

SHALL ISSUE: If you don’t have a criminal record, they must issue you a permit (some states have prerequisites, such as safety training, but there is no veto power held by the constabulary).

PERMITLESS: You can publicly carry if you have no criminal record, and you don’t need to get a permit first.

NO ISSUE: Doesn’t exist anymore, but refers to when a state government simply disallowed public carry to everyone.

Our evaluation looked at the annual difference in the homicide rates for each permitless state against the average homicide rates of states that had no change in their permitting legislation. The operational theory is that the difference over time would indicate if the permitless law was a net positive or negative compared to not changing anything.

It was neither a net positive nor negative. It was a null.

The slope of the line for states adopting permitless carry was identical for five years before and after the switch to permitless… down to two decimal places. Homicide rates (measured in murders per 100,000 population) were increasing at a slope line of 0.07 before and 0.07 after enactment.

But there was an odd uptick at the end of the five-year spans, caused by one state, Alaska. You will note that Alaska’s annual homicide rate leaps up and down. This erratic fluctuation is due to Alaska having the lowest population density of all states, and thus any small change in their total number of homicides produces a large change in their homicide rate.

Keep in mind, though, that with Alaska in the mix, the aggregate before-and-after homicide differential rate was dead even. Let’s treat Alaska as a very odd outlier and take them out of the equation.

When we do that, the pre-permitless homicide difference with states that didn’t change is 0.06 before the switch, and after it is -0.02, a net murder reduction. Notice that the average of all the differences (the fat, red line) is basically flat and would have been flatter still had it not been for single year rise in Arizona and Kansas in their fourth year of permitless carry.

In Danger of Boredom

It appears that permitless carry makes no meaningful difference in aggregate, though the diving lines for Mississippi and Missouri are of interest. There have been periods of unrest in Missouri, and with them switching to permitless a mere four years ago, we may be seeing the effects of broader social change there. But Mississippi is a head scratcher. They switched just one year before Missouri but have a great and downward rate of change. Perhaps global warming has made it too hot in Mississippi for anyone to have the energy to murder anyone else.

Many thanks to Gun Facts volunteer Chris C. for the laborious task of scraping together the crime data.