Does not having a father in the home increase the odds of committing a homicide?

It appears so, though there are a few factors that complicate things. But leave it to say that fatherless homes might be manufacturing more murders.

Any number of studies have focused on race, urbanization, and poverty as contributing factors to young men murdering. For decades criminologists have noted that the odds of being a murder victim or perpetrator is vastly higher if you are poor, live in a metropolitan area, and are black.

Many people openly speculate that part of the puzzle might be the disruption of traditional family structures within the inner cities. 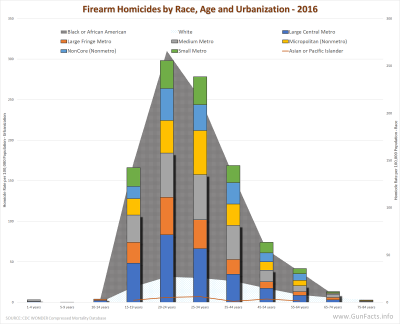 But fractured homes exist everywhere, in major metropolitan cities and smaller communities (there is an astoundingly low 0.03 R2 correlation between the total number of households and those without a father present, for counties ranging from 20,000 to 3.3 million households, indicating urbanization is not a factor in single-parent families). 1

All other things being equal (which they never are) the absence of a father or strong father figure might be associated with young men seeking fraternity with non-family males. This is the core of gang affiliation, and we see that street gangs are the volcanic source of gun play nationwide. We at the Gun Facts project triangulated the data and concluded that 85% of gun homicides are street gang related or nexus. Fatherless households should, in theory, produce higher homicide rates (and thus gun homicide rates) even in more lightly populated areas with less gang activity.

This appears to be the case.

The Necessary Cautions Before We Dump the Details

What drives someone to murder is multifaceted. We can look at multivariate correlations day and night, but we must accept there are variation to everything. For example, it has long been noted that being poor, black and urban is highly associated with being shot dead or shooting someone else. But if you contrast Oakland, California and Atlanta, Georgia, the city with a higher concentration of poverty and blacks has a lower violence rate.

For this review, we are doing a univariant look-see for the question of whether a lack of a father in a home might lead a male child toward risky behaviors, such as homicide.

Finally, due to data availability limitations from the Census Bureau, this study only looks at 327 counties that reported data on household parenting. That being said, it covers 43 states and locations from Apache County, Arizona (20,550 households) to Los Angeles, California (3.3 million).

Urbanization Doesn’t Matter, But Fathers Do

For comparison’s sake, we also measured homicide rates against poverty rates. As you can see, the rate of fatherless households is much more strongly correlated to homicides than poverty.

Let’s go back to the chart at the top of this page, where we see that the rate of homicides among young black makes is astronomical compared to other groups. If the theory of fatherless homes holds true, then we might expect the high homicide rates among young black males to be caused (in part) if there was a high rate of fatherless households for blacks. According to the National Vital Statistics System, this is the case, and one that has been worsening for decades.

“My Dad Would Knock Me into the Middle of Next Week if I Did That!”

One of the reasons there is only a 46% correlation between fatherless households and homicides is that not all households without fathers are devoid of strong, older male guidance, which has the byproduct of enforced discipline. Young men are notorious for lacking self-discipline, as displayed by their sexual overdrive, amateur stunt driving, and way too many “hold my beer” moments. Strong elder males – fathers, uncles, grandfathers, older brothers, preachers – can supply some external discipline, which might stop some stupid activities such as joining a street gang.

The problem we face is addressing what causes any family to lack a father. In poor neighborhoods, the causes are manifest. Some parents never wed due to social safety net support (e.g., welfare). Some fathers die, especially if they are involved with street gangs. Others are in the state penitentiary (also strongly associated with street gang activity). To change the rate of homicides (and thus gun homicides) may require getting more sires to be fathers, and that requires a frank look at the sundry motivations to not be a dad.