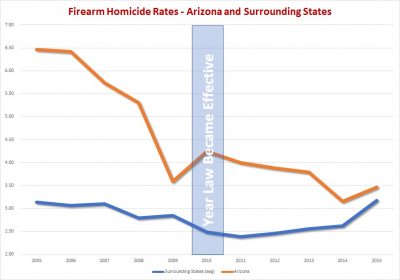 Back in 1988, when Florida became the first large state to enact shall-issue concealed carry, there was a great deal of uncertainty about the outcome. But their post-passage lack of bloodshed led to all but a handful of backwards thinking states (talking to you California) to pass similar legislation. The same thing might be happening with permitless carry (a.k.a. constitutional carry), where the whole concealed carry licensing process is jettisoned. I got curious about the criminological realities of permitless carry when a Gun Facts fan emailed to ask what we knew about the subject, which was nearly nothing. The reason is that aside from one outlier state, this is a new phenomenon and statistics are limited at best. But curiosity is a demon, and we had to take a peek. After a little number crunching, our extremely preliminary investigation concludes that permitless carry at very least causes no mayhem. The … END_OF_DOCUMENT_TOKEN_TO_BE_REPLACED