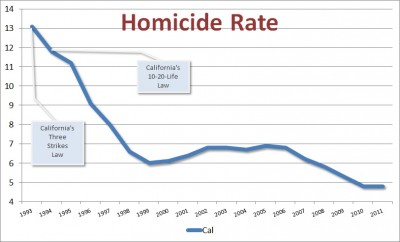 The new anti-gun agitprop masters are in the Law Center to Prevent Gun Violence. I’ll be writing about them frequently because they are: Getting good at creating falsehoods. Are drafting laws and getting them passed in California. Have money … and lots of it. Their most recent con is claiming that California’s 20 year drop in gun deaths is due to gun control laws. “Proof in the Data: Thousands of Lives Saved” is their tag line and is accompanied by a chart showing the firearm death rate in the Golden State. There are a number of major problems with their numbers (mainly Cal’s fast falling suicide rate) but more importantly is what they omit, namely criminal control laws. Their chart begins in 1993, a year with no significant gun control laws in California and the year when violent crime nationwide was peaking. If anything Cal rode a national wave. But … END_OF_DOCUMENT_TOKEN_TO_BE_REPLACED