For decades, the raw data has shown that the bulk of gun crimes, woundings and deaths occur in the inner cities and are closely associated with gangs.

What we don’t have a great deal of clarity about is why and how this situation has come to dominate gun violence. Forget the statistically rare mass public shootings, the even more rare terrorist events, and even the plummeting rates of gun accidents.

If you are actually serious about “gun safety,” then you focus on what is occurring inside of major metro areas. Seventeen people died in the Parkland High School shooting. That many high school aged blacks die every week from gun violence, and these deaths are not tied to mass murders.

Thanks to the Center for Court Innovation, we have some added clarity.

“Gotta Make Your Own Heaven”

That is the title of a solid bit of research 1 published in August of 2020 and funded by the federal Department of Justice (errrr, what was someone saying about there being a lack of gun violence research funding?).

This is a small study of three neighborhoods in New York, so great caution needs to be taken in expanding this to national conclusions. But the study focused intently on “at risk” young people and their involvement with guns.

A point of praise goes to the researchers and anyone else who tries to do a statistically sound review of gang-centric crime. You cannot simply roll into a bad neighborhood and start polling people. The degree of distrust is high among the residents, more so for people not of their neighborhood, and positively zero for anyone who might be associated with the law. The researchers used intermediaries who knew the culture, the gangs, the music and such to get many respondents and even get inside of gang buildings.

Let’s start with some hard numbers, and later we’ll wrap a little texture around it.

88%: Have a family member of friend who has been shot or shot at

70%: Have witnessed someone being shot 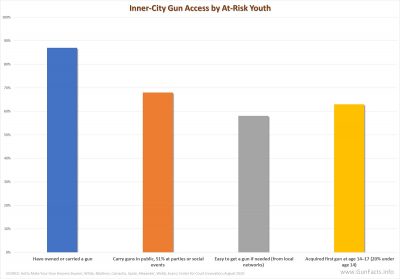 58%: Easy to get a gun if needed (from local networks)

95%: Aware of gangs in their neighborhood

71%: Enjoyed being a gang member

63%: Raised by a single parent

26%: Feel that neighbors don’t trust each other

20%: Their illicit jobs “require” them to carry guns

91%: Stopped by police in the last two years

38%: Have gun charges against them

Unquantified: High use of marijuana to impede violent reactions, including misusing guns

Unquantified: Sees gangs as a source of love and community they lack at home (keywords – brotherhood, family)

Let’s summarize. For these people who are prime gangs+crime+guns participants:

Without copying and pasting, here are some of the narratives that illustrate why this has been a multi-decade problem:

Their social structure – be it family or neighborhood – is dysfunctional. Parents are dead, in jail or use drugs. Children are raised in an environment without strong affection, guidance or control.

In these neighborhoods gangs are the social and economic base. The gangs provide affection, guidance, control and a chance to earn money, albeit through criminal activity. Crime is the norm in these neighborhoods, so the resistance to becoming a gang-centered criminal is low.

Though we did not summarize the stats, there is a widespread assumption that the police are a force for harassment (over petty crimes), operate as a gang themselves, and have very little interest in protecting and serving the tough neighborhoods. This includes a belief that the police do not actually protect residents from violence.

As you see, there are several vectors that lead to criminal activity, typically within gangs, solidly within inner cities. These vectors are the progenitors of most American gun violence, and thus the primary place to focus attention.

But we also see that the established underground networks for acquiring guns negates the effect of any retail-level gun control. Stated more simply, restricting retail gun sales will have no effect on the largest portion of gun violence.