Public Mass Shooters and Firearms: A Cross-National Study of 171 Countries

Claims that the United States has more mass public shootings (MPSs) that all other nations, 31% of global count.

Claims changes in Missouri’s “permit to purchase” pistol and concealed carry laws led to an increase in suicide.

Handgun Ownership and Suicide in California

Evidence concerning the regulation of firearms design, sale, and carrying on fatal mass shootings in the United States

Criminologist Gary Kleck published a paper 1 reviewing this study which contained these (and other) critical observations:

Reviews a subset of California based “red-flag” gun confiscation episodes with an eye toward mass public shootings.

Uses an arbitrary ranking of the strictness of state gun laws and included adults (age 18+) to reach generate invalid statements. 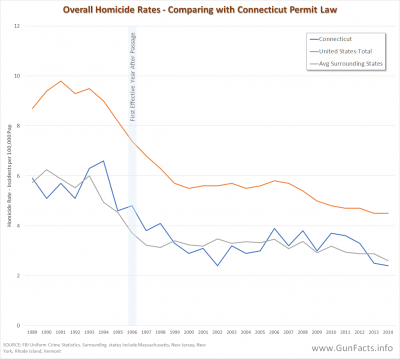 Criminal Use of Assault Weapons and High-Capacity Semiautomatic Firearms: an Updated Examination of Local and National Sources

Paper uses an odd selection of control variables along with synthetic modeling of data, based on select assumptions, to generate crime statistics that do not actually exist.

The paper uses a proxy for the relative degree of gun control in the sundry states. They also use an academic paper to estimate gun ownership rates in each state.

This is a review of literature spanning 64 years (1950 through 2014). The papers were drawn from three databases (PubMed, Scopus and Web of Knowledge) and exclusions made using Guide to Community Preventive Services.

Firearm Legislation and Firearm Mortality in the USA: a cross-sectional, state-level study

This study is famous for making the claim that nationalizing three gun control laws would reduce gun deaths by 90%.

An epidemiology approach to criminology and the alleged cause/effect of firearm legislation. Highly critiqued by many. In fact, an accompanying commentary in the same Lancet edition listed several methodology exceptions.

Survey Research and Self-Defense Gun Use: An Examination of Extreme Overestimates

This paper claims to refute the conclusions of Gary Kleck and Marc Gertz, whereby Kleck/Gertz concluded the now certified claim of 2.5 million defensive gun uses (DGUs) every year. Yet, Hemenway’s paper never makes a point. There is a lot of speculation, odd yet inappropriate examples, and outright inaccuracies. In the end though, no refute is actually made and no statistical proof is offered.

Hemenway is listed as a Professor of Health Policy at the Harvard School. This is another instance of medical academics dabbling inexpertly into criminology. Indeed, Hemenway inaccurately used an epidemiology truth table in this paper to incorrectly explain survey response accuracy methods. The major problems with this “refute” include:

This paper claims that states with higher hoursehold firearm ownership rates have higher suicides rates, and that the association is “significant”.

Foremost, the study is unbalanced. To get the numbers that compared 15 “high ownership” states with a mere six “low ownership” states. They did this to compare roughly the same gross number of people, but this leads to stacking the deck in terms of the type of state cultures.

The cultural aspect is important. Many of the “high ownership” states are very rural, low population density, and have strongly “independent” cultures – cultures where people make their own decisions, including life and death ones. The “high ownership” states included Wyoming, the Dakotas, Montana, Alaska, etc. It should be noted that some of these rural states (West Virginia being one) have unusual drug and alcohol abuse rates, which is a key determinant for suicides.

As important, of the mere six states in the “low ownership” set, the authors included Hawaii, which has a profoundly different culture and is unique by its geographic isolation.

Using Bureau of Alcohol, Tobacco and Firearms (BATF) crime gun trace data, along with questionable ranking systems and other methodology mistakes, the report attempted to identify several states other than New York as the source for crime guns. The report blames the bulk of New York’s crime gun sources on the mythical Iron Pipeline.

Claims that states with firearm purchase background laws have a lower rate of school shootings.

Claims that blood lead levels (BLL) in employees at firing ranges is dangerous.