“Assault weapon” is an invented term. In the firearm lexicon, there is no such thing as an “assault weapon.” 1 The closest relative is the “assault rifle,” which is a machine gun or “select fire” rifle that shoots rifle cartridges. 2 In most cases, “assault weapons” are functionally identical though less powerful than hunting rifles, but they are cosmetically similar to military guns.

Myth: Assault weapons are a serious problem in the U.S.

Fact: In 1994, before the Federal “assault weapons ban,” you were eleven (11) times more likely to be beaten to death than to be killed by an “assault weapon.” 3

Fact: Nationally, “assault weapons” were used in 1.4% of crimes involving firearms and 0.25% of all violent crime before the enactment of any national or state “assault weapons” ban. In many major urban areas (San Antonio, Mobile, Nashville, etc.) and some entire states (Maryland, New Jersey, etc.) the rate is less than 0.1%. 5

Fact: Police reports show that “assault weapons” are a non-problem:

For the rest of the nation:

Fact: Only 1.4% of recovered crime weapons are models covered under the 1994 “assault weapons” ban. 10

Fact: In Virginia, no surveyed inmates had carried an “assault weapon” during the commission of their last crime, despite 20% admitting that they had previously owned such weapons. 11

Fact: Most “assault weapons” have no more firepower or killing capacity than the average hunting rifle and “play a small role in overall violent crime.” 12

Some men use weapons to compensate for their inadequacy in bed, but is better suited for this.

Fact: Even the government agrees. “… the weapons banned by this legislation [1994 Federal Assault Weapons ban – since repealed] were used only rarely in gun crimes … There has been no discernible reduction in the lethality and injuriousness of gun violence, based on indicators like the percentage of gun crimes resulting in death or the share of gunfire incidents resulting in injury.” 13

Myth: Assault weapons are used in between 2 and 9% of gun crimes

Fact: This data point came from a study with very weak data and numerous methodology issues. 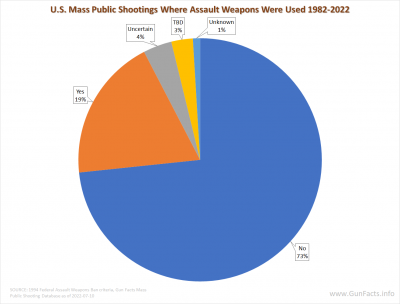 Fact: A decade long study, covering 84 mass public shootings, found that pistols were used 60% of the time. Rifles were used 27%. 15 But that is all types of rifles, and so-called “assault weapons” (such as the AR-15 or civilian versions of the AK-47) are a subset of these.

Myth: Assault weapons cause more serious damage to a body that handguns or common rifles

Fact: “Civilian public mass shooting events with a handgun are more lethal than those associated with use of a rifle.” 16 This would, of course, include the two most common civilian “assault weapons”, namely the AR-15 and AK-47. 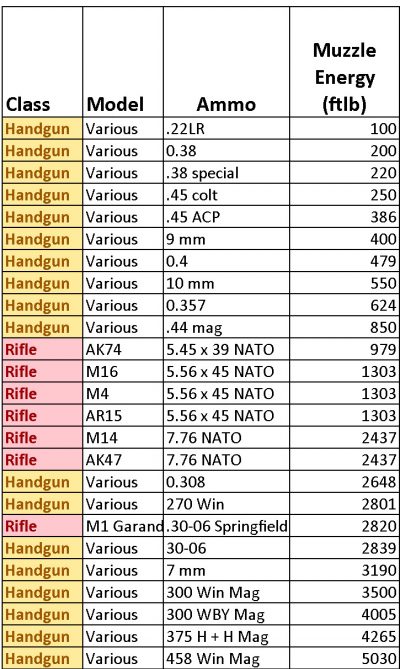 Fact: Bodily damage is a factor of the amount of energy transferred from the bullet to the body, and which organs it hits. 17 This is measured in “foot pounds” (ftlb) of energy. This chart shows the AR15 and AK17 rounds are in the middle of the list, and far less than the M1 Garand, a WWII rifle the U.S. government gives surpluses of away as part of the Civilian Marksmanship Program.

Myth: Every 48 hours, an assault rifle is traced to crime in Maryland

Fact: This claim by Cease Fire Maryland includes firearms never used in crimes. Some examples of firearms traced include:

Myth: One out of five police officers killed are killed with assault weapons 18

Fact: This “study” included firearms not on the former Federal “assault weapons”list. By including various legal firearms 19 the report inflated the statistics nearly 100%.

Fact: Only 1% of police officers murdered were killed using “assault weapons.” They were twice as likely to be killed with their own handgun. 20

Fact: Police don’t think it is a major problem, with 91% saying an assault weapons ban would have either no effect or a negative effect on violent crime. 22

Fact: Only 6% of criminals use anything that is classified (even incorrectly) as an “assault weapon,” 23 and fewer than 2.5% of criminal claimed to use these firearms when committing crimes. 24

Fact: Criminals are over five times more likely to carry single shot handguns as they are to carry “assault weapons.” 25

Fact: “Assault rifles have never been an issue in law enforcement. I have been on this job for 25 years and I haven’t seen a drug dealer carry one. They are not used in crimes, they are not used against police officers.” 26

Fact: “Since police started keeping statistics, we now know that ‘assault weapons’ are/were used in an underwhelming 0.026 of 1% of crimes in New Jersey. This means that my officers are more likely to confront an escaped tiger from the local zoo than to confront an assault rifle in the hands of a drug-crazed killer on the streets.” 27

Myth: Assault weapons can be easily converted to machine guns

Fact: Firearms that can be “readily converted” are already prohibited by law. 28

Fact: None of the firearms on the list of banned weapons can be readily converted. 29

Myth: Assault weapons are used in 16% of homicides

Fact: Murder rates were 19.3% higher when the Federal assault weapons ban was in force. 31

Fact: ” … we cannot clearly credit the ban with any of the nation’s recent drop in gun violence.” 32

Fact: The ban covered only 1.39% of the models of firearms on the market, so the ban’s effectiveness is automatically limited.

Fact: “The ban has failed to reduce the average number of victims per gun murder incident or multiple gunshot wound victims.” 33

Fact: “The public safety benefits of the 1994 ban have not yet been demonstrated.” 34

Fact: “The ban triggered speculative price increases and ramped-up production of the banned firearms … prior to the law’s implementation,” 35 and thus increased the total supply over the following decade.

Fact: The Brady Campaign claims that “After the 1994 ban, there were 18% fewer ‘assault weapons’ traced to crime in the first eight months of 1995 than were traced in the same period in 1994.” However, they failed to note (and these are mentioned in the NIJ study) that:

Myth: Assault weapons have only one purpose, to kill large numbers of people

Fact: Of the millions of these firearms currently in civilian hands, they are routinely used for:

Myth: Nobody needs an assault weapon

Fact: Their light weight and durability make them suitable for many types of hunting and are especially favored for wild boar hunting.

Fact: Their lighter recoil combined with light weight make them the preferred rifle with people of small stature or limited strength.

Fact: Recall the 1992 Rodney King riots in the anti-gun city of Los Angeles. Every major news network carried footage of Korean store owners sitting on the roofs of their stores, armed with “assault weapons.” 37 Those were the stores that did not get burned to the ground, and those were the people that were not dragged into the street and beaten by rioters. “You can’t get around the image of people shooting at people to protect their stores and it working. This is damaging to the [gun control] movement.” 38

Fact: There are many reasons people prefer to use these firearms:

Fact: There are many sports in which these firearms are required: