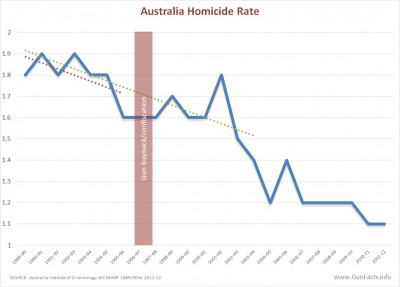 “Australia,” said Hillary Clinton, “[is] a good example …” concerning gun control. But what precisely is it a good example of? Certainly not homicide. Major take-aways: 1996/97 gun ban and confiscation had no effect on homicides Ban may have led to increased sexual assaults Unarmed robbery fell faster than armed robbery, showing a disconnect The history and the current political claim In the wake of a mass shooting in Port Arthur, the Australian government orchestrated a “National Firearms Agreement” whereby all the states within Australia would enact tougher gun control (the various states within Oz largely had their own localized gun control regimes). The system banned all semi-automatic rifles, all semi-automatic and pump-action shotguns, and created a restrictive system of licensing and ownership which was nothing short of draconian (then again, what can you expect from a government that censors Internet content). The government was legally compelled to compensate people … END_OF_DOCUMENT_TOKEN_TO_BE_REPLACED