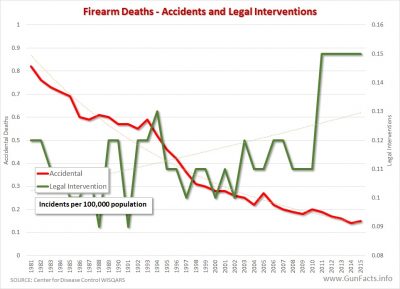 While spelunking some data on the modes of gun deaths, I decided to have a look at some smaller instances, namely how often people die accidentally from gunshots, and the number of justifiable (perhaps even meritorious) homicides. Most readers already know that accidental gun deaths have been in sharp decline for several decades, despite the number of firearms in circulation skyrocketing. This is a curious situation, and one that goes directly against claims by the gun control industry. With concealed carry a fact of daily life in 42 states, one might also think justifiable homicides have gone up. They have, but only slightly. But this too also goes against the claims of gun control advocates, who maintain that concealed carry does not prevent crime (we’ll ignore the whole deterrence effect issue, which is likely contributory to the multi-decade drop in violent crime in America). Though the number of incidents for … END_OF_DOCUMENT_TOKEN_TO_BE_REPLACED