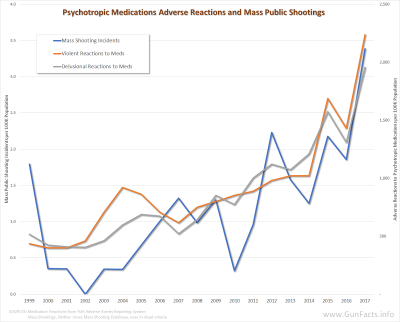 Is national consumption of brain candy contributory to mass public shootings? Looks like it might well be. Takeaways There exists covariant rise in the per capita number of adverse psychological reactions to prescription psychotropic medications and mass public shootings. The rate of adverse medication reactions may be low by an order of magnitude. Mental health and mass shootings The Gun Facts project previously reported on the association between mental health and mass public shootings. However, the review omitted one interesting issue – the contribution of pharmaceutical psychotropic medications. psychotropic: affecting mental activity, behavior, or perception We first became concerned with this topic after the Columbine Massacre. It was reported that one of the two assassins did a cold turkey withdraw from Luvox (an antidepressant) because a known side effect was rage. In other words, he wanted to be as amped-up as possible to commit mass murder. When we started looking … END_OF_DOCUMENT_TOKEN_TO_BE_REPLACED