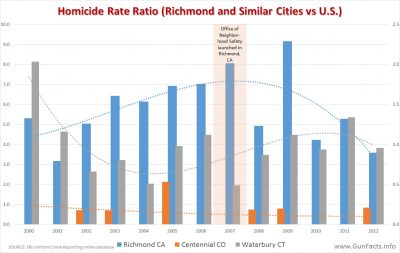 Some cities have targeted gang members and seen significant reduction in gun deaths. By treating the disease, they are rediscovering the cure. Major take-aways About 74% of inner-city homicides (and other violence) is caused by 1% of the population Motivating gangs to not kill works The motivation can be peer pressure, intervention or incarceration The never ending gang backstory Criminologists have long noted that gun violence tends to be a Big City problem. Subcultures within urban centers spawn violence committed for little good reason. This then creates a disproportionate number of homicides. But what we have also known all along is that even though America’s gang participation rate is huge compared to non-U.S. cities, the number of gang members in the general population is small. In one report (which we discuss in more detail below) gang members account for less than 1% of the population, though they are responsible for … END_OF_DOCUMENT_TOKEN_TO_BE_REPLACED