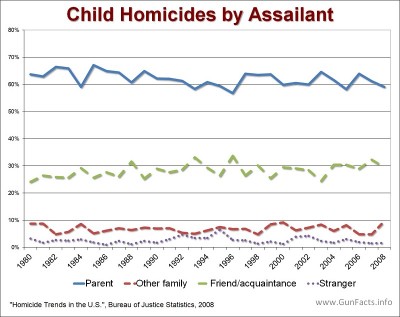 A talk radio host called me for some show prep. He had a guest coming on who planned on making the claim that in 2010 guns killed more children under age five than cops. She was right, but wrong at the same time. Indeed, in the year 2010, more Americans under age five died from bullets than police did. But this scary statistic was designed to scare, not to illuminate. When you look at two issues, the perspective gets very clear very quickly. Population Murdered Accidental Children (CDC) 54 25 Police (Officer Down) 59 2 Children (% pop) 0.0003% 0.0001% Police (% pop) 0.0131% 0.0004% Difference % pop  49:1  4:1 Foremost, there are a lot more kids than cops. In 2010, we had about 44 times as many crumb crushers than active duty officers (U.S. Census Bureau and the FBI Crime in the United States tally for 2009). Comparing these … END_OF_DOCUMENT_TOKEN_TO_BE_REPLACED