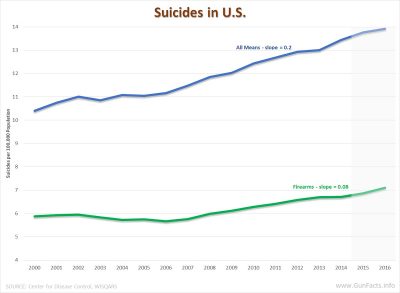 The Lie of Fear: Creating a false sense of fear in order to motivate people to action while easing them past critical thinking. This entry, from the book Shooting The Bull, was the very first items in the “Catalog of Canards”, a list of most common propaganda techniques of the modern era. That organizations favoring gun control too often employ the Lie of Fear is regrettably understandable. Which brings us to The Trace and their artless attempt to scare people about suicides: Take-aways Firearm suicides growing much more slowly than overall suicides. Trace chose to start trend analysis during a low-point in firearm suicides. The interesting angle Depending on the year you examine, firearm suicides constitute about 60-66% of firearm deaths in the United States. For decades gun control advocacy groups (which, charitably stated, The Trace is one, given the legendary activist donors on their disclosure page and that Michael … END_OF_DOCUMENT_TOKEN_TO_BE_REPLACED