Much has been made in public discussion about a slogan popularized (though I doubt originally penned by) the National Rifle Association, namely: “The only thing that stops a bad guy with a gun is a good guy with a gun.”

Ignoring that no such absolute statement is true (e.g., “all politicians are criminals”), it is a good slogan to ponder. What is the efficacy of armed response to an attacker? We at the Gun Facts project have covered this question quite a bit on the Guns and Crime Prevention page, and there is no use going through all that again.

But in terms of mass public shootings (MPSs), and we’ll include active shooter events (ASEs) in this tally as well, the situation has better clarity due to the fact there is an indisputable violent event happening. Many defensive gun uses (DGUs) may be against unarmed attackers or have a lower urgency of response. With MSPs and ASEs, the need to intervene to prevent loss of life is clear and indisputable.

How Shooting Events are Resolved 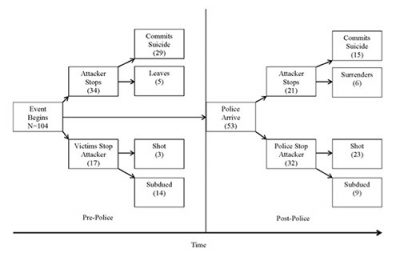 One of the more interesting studies of ASEs 1 examined how such events were stopped. The authors split their analysis into what happens before the police arrive and after. We’ll discuss this divide a bit more below as it fits into the ongoing debate about allowing teachers in K12 schools to be armed.

There are several unsurprising outcomes from their analysis.

Thus, practically speaking, the “good guy with a gun” theory is statistically sound. But when it comes to the total number of lives saved, it is only part of the story

Another study 2 looked specifically at school shootings, and using the available empirical data, modeled a few things including the amount of time different defenders (cops, resource officers, people with concealed carry permits) would take to intervene and how many/few people would get hurt by the attacker. 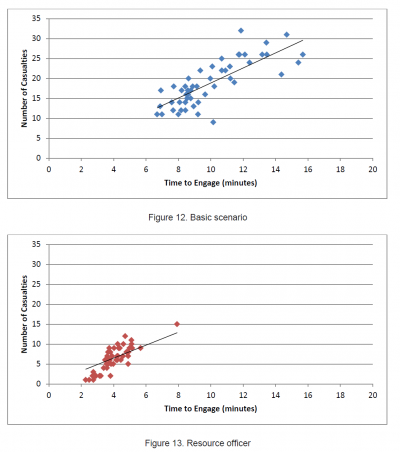 I find little wrong with their modeling, aside from the relative dearth of school shootings available at the time with which to form their data set. Accepting that there may be some statistical noise due to limited instances of mass public shootings at schools, the authors determined that when an armed resource officer was on campus and engaging the attacker (unlike at Parkland), the response time was significantly shorter (less than half the time) and the number of casualties was significantly lower (about 40% lower).

But the authors went further. They added to the mix scenarios where a citizen with a concealed carry permit was on site, such as a teacher with a CCW and a gun. The numbers are compelling, and are in the same ranges as what we saw in the previous study when we compare the rate of armed resolutions with unarmed ones (78% vs 22% respectively).

The empirical data shows that armed resistance to ASEs and MPSs provides the best outcome, not only in terms of the rate of halting such events, but also in reducing the number of people wounded or killed by the attacker. The question is who should be armed, especially at schools.

Armed intervention by resource officers is very effective when, unlike at Parkland, they actually intervene. The time to response is short, and the number of people hurt is much lower. Too few schools have a significant number of armed faculty to have robust statistical evidence of efficacy, but the same dynamics are in play. Most (71%) of ASE and MPS attackers give up when confronted, by committing suicide or surrendering.

If schools have more resource officers, more armed faculty, or in the case of colleges, more CCW carrying students, then the death and injury rate is substantially reduced.