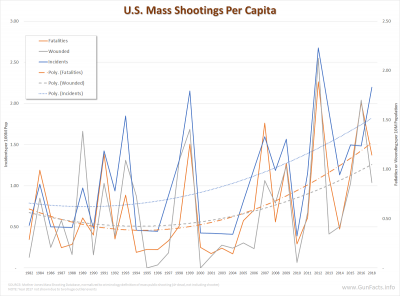 “The rate of mass shootings per 100,000 population has gone DOWN by an extraordinary degree.” Though not a recurring pro-gun meme, this one was sent to the Gun Facts Project by someone from the pro-gun camp. It was an interesting claim, but incorrect. Investigating the claim then led us to dig and try to find underlying realities. Seriously, the Gun Facts researchers need to get a life. Mass Shootings Increase Mass shooting incidents and fatalities are on the increase (and highly covariant with reported adverse reactions to prescription psychotropic medications). When we adjust for the increasing U.S. population, we still see per capita increases in the number of instances as well as the number of fatalities and woundings. One thing jumped out at us from the initial charts, namely several outliers. Certain years showed dramatically large spikes. The most prominent of the spikes were the years of the Virginia Tech, … END_OF_DOCUMENT_TOKEN_TO_BE_REPLACED 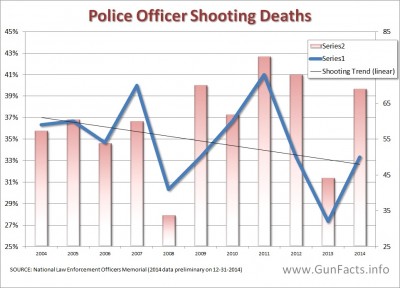 Headlines are misleading things … by design. Case in point: Bloomberg news feeds (yes, the same Bloomberg who is funding the resurgent gun control industry) issued the headline “56% Increase in Gun Fatalities Leads Rise in Police Deaths.” The associated article begins with “U.S. law-enforcement deaths rose to the highest in three years, led by a 56 percent increase in the number killed by gunfire …” and then proceeds to tie the trend to recent racial tensions. What the article doesn’t say is that over the past decade, the number of cops being shot on the job is declining and that 2013 was a low outlier year that distorts 2014’s “increase” The source for the data is the National Law Enforcement Officers Memorial, and I’ll assume they are reasonably meticulous in their gathering of on-the-job police fatality counts. Thankfully, they post the numbers they have gathered over the past decade … END_OF_DOCUMENT_TOKEN_TO_BE_REPLACED