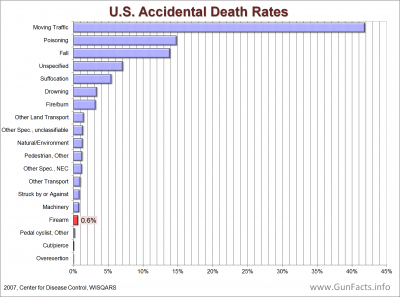 Fact: Firearm misuse causes only a small number of accidental deaths in the U.S. 1 For example, compared to being accidentally killed by a firearm, you are:

Fact: In 2007, there were only 54 accidental gun deaths for children under age 13. About 12 times as many children died from drowning during the same period. 2

Fact: In 2007, there were 999 drowning victims and 137 firearm-related accidental deaths in age groups 1 through 19. This despite the fact that firearms outnumber pools by a factor of more than 30:1. Thus, the risk ratio of drowning in an available pool is nearly 100 times higher than dying from a firearm-related accident for all ages, and nearly 500 times for children ages 0-5. 3 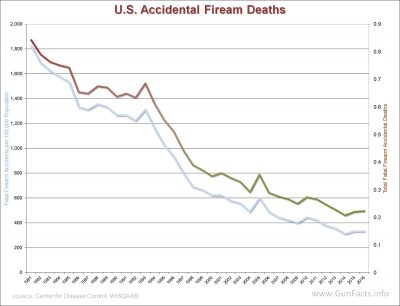 Fact: Medical mistakes kill 400,000 people per year – the equivalent of almost three fully loaded Boeing 747 jet crashes per day – or about 286 times the rate of all accidental firearm deaths. 4 This translates into 1 in 6 doctors causing an accidental death, and 1 in 56,666 gun owners doing the same.

Fact: Only 2% of gun deaths are from accidents, and some insurance investigations indicate that many of these may not be accidents after all. 5

Fact: Around 2,000 patients each year — six per day — are accidentally killed or injured in hospitals by registered nurses. 6

Myth: Handguns are unsafe and cause accidents

Fact: Handguns have triggers that are difficult for small (child) hands to operate, and are rarely the cause of accidents. 8

Fact: Less than 1% of all gun homicides involve innocent bystanders. 9

Myth: Citizens are too incompetent to use guns for protection

Fact: Most firearm accidents are caused by people with various forms of poor self-control. These include alcoholics, people with previous criminal records, people with multiple driving accidents, and people who engage in other risky behaviors. 11

Fact: The rate of gun accidents is so low that the U.S. Consumer Product Safety Commission doesn’t even mention them in their annual safety reports.

Myth: “Junk” guns are dangerous and should be banned

Fact: In the history of the state of California, not one lawsuit against a gun maker had been filed (until 2003) based on a weapon being defective or poorly designed. 12

Myth: Guns should be made to conform to product liability laws

Fact: Guns are already covered under product liability laws. If you have a defective gun that does not operate properly, you can sue the gun maker.