Background: Microstamping is a proposed means for imprinting unique serial numbers onto cartridges fired from a gun.  Similar to “ballistic fingerprinting,” it allegedly helps police identify what firearm might have been used in a crime.  Microstamping uses precision equipment to remove microscopic amounts of metal from the tip of the firing pin 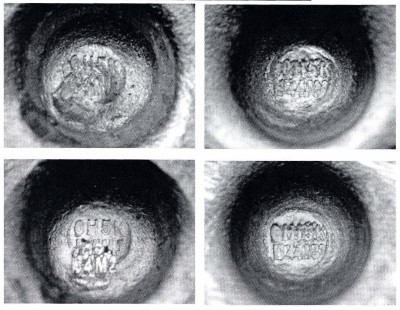 Fact: Firing pins are readily removable and swappable in most models of handguns, with inexpensive replacement parts.  Criminals who file down serial numbers on the sides of guns won’t hesitate to file or exchange firing pins.

Fact: 46% of impressions ranked as “unsatisfactory” (i.e., illegible) after only ten rounds. 1

Fact: Reloaded ammo (which is extremely common due to the economics of recycling casings and home reloading tools) will make prosecuting cases nearly impossible once the “reloaded ammo” defense is raised (for microstamping that imprints case sides).  A case may have two or more markings, making the final shooter impossible to identify.

Myth: Filing the firing pin will make the gun inoperable

Fact: Firing pins are designed to be pushed deeply into the primer (igniter) of the round.  The depth of the engraving (approximately 0.005 inch) 2 is vastly smaller than the tolerance of the firing pin’s drive depth.

Fact: In a test, the engravings were removed using a 50-year-old knife sharpening stone in less than a minute.  The firearm still operated correctly after the filing. 3

Myth: The cost per firearm will be cheap

Fact: The National Shooting Sports Foundation, the representative for firearm manufacturers, estimates the cost will be upwards of $150 per firearm, more than tripling the price of self-protection and making it unaffordable for low-income people. 4 The Brady Campaign dispute those with firearm manufacturing experience claiming micro-stamping would cost only 50¢?

Fact: Since many crime guns are stolen property, 5 finding the original owner does not help solve the crime.