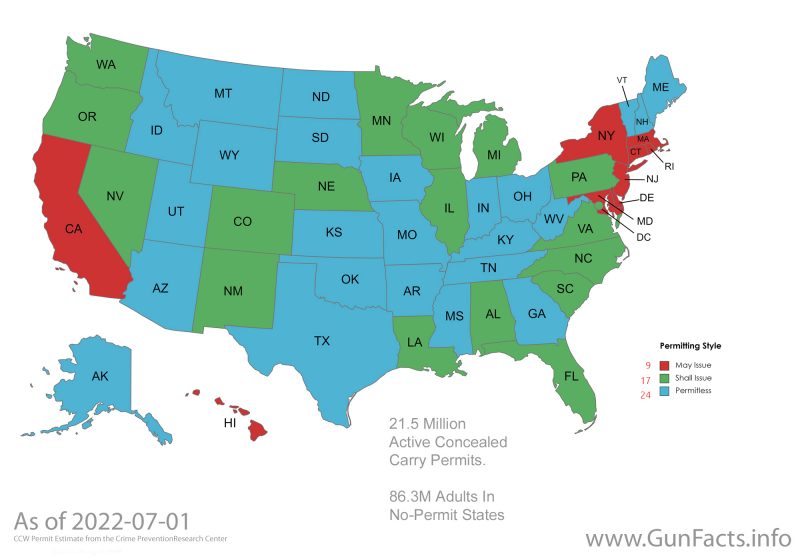 NOTE: About 26.3% of gun owners are “public carriers”, meaning that carry in public at least “sometime”. 1. This equates to a little more than 10% of the population age 21 or higher.

Fact: There are approximately 182,000 defensive gun uses in public each year. 2

Fact: News reports tell many stories of armed civilians preventing mass murder in public. A few selected at random include:

Fact: The FBI documents 3 that 3.2% of active shooter events were stopped by CCW holders. However, other researchers claim the FBI undercounts the number of incidents (e.g. excluding events that were precipitated by a grudge) and the on the high end the number is 16.5% 4. 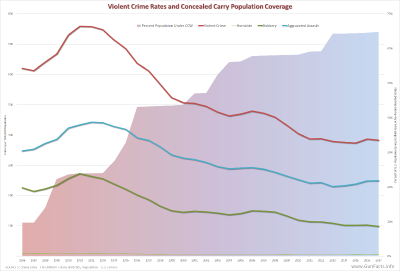 Fact: Forty-two states, comprising the majority of the American population, are either “right-to-carry” states – where anyone without a criminal record will be issued a permit – or require no permit at all (though there are legal restrictions carrying weapons by felons, dometic abusers, etc.). In 1988 there were only ten “right-to-carry”. Statistics show that in these states the crime rate fell (or did not rise) after the right-to-carry law became active.

Fact: Gun homicides were 10% higher in states with restrictive CCW laws, according to a study spanning 1980-2009. 5

Fact: Crime rates involving gun owners with carry licenses have consistently been about 0.02% of all carry permit holders since Florida’s right-to-carry law started in 1988. 6

Fact: After passing their concealed carry law, Florida’s homicide rate fell from 36% above the national average to 4% below. 7

Fact:  Crime is significantly higher in states without right-to-carry laws. 10

Fact: Deaths and injuries from mass public shootings fall dramatically after right-to-carry concealed handgun laws are enacted. Between 1977 and 1995, 12 the average death rate from mass shootings plummeted by up to 91% after such laws went into effect, and injuries dropped by over 80%. 13

Fact: This rather miserable working paper is a wellspring of bad methodology, which might explain why it was not (as of July 2017) published in a peer reviewed journal.

Fact: The Violence Policy Center started listing instances of CCW holders shooting police. 14 From May 2007 through November 2009 (2.5 years) they recorded nine police deaths, three in one mass killing by a white supremacist using an AK-47 rifle. Of the nine, five had yet to be tried or convicted as of the date of their report.

Fact: The results for the first 30 states that passed “shall-issue” laws for concealed carry licenses are similar.

Fact: Even gun control organizations agree it is a non-problem. One said about Texas, “because there haven’t been Wild West shootouts in the streets”. 26

Fact: Of 14,000 CCW licensees in Oregon, only 4 (0.03%) were convicted of the criminal (not necessarily violent) use or possession of a firearm.

Fact: “I’m detecting that I’m eating a lot of crow on this issue … I think that says something, that we’ve gotten to this point in the year and in the third largest city in America there has not been a single charge against anyone that had anything to do with a concealed handgun.” 27

Fact: In Florida, a state that has allowed concealed carry since late 1987, you are twice as likely to be attacked by an alligator as by a person with a concealed carry permit. 28

Myth: 460 people have been killed by CCW permit holders

Fact: The “study” by gun control group Violence Policy Center covers a six year span, meaning that at worst there is an average of 76 shootings of all types per year, including justifiable homicides.

Myth: Concealed guns in bars will cause violence

Fact: In Virginia, in the first year where CCW holders were allowed to carry in bars, the number of major crimes involving firearms at bars and restaurants statewide declined 5.2%  The crimes that occurred during the law’s first year were relatively minor. 30 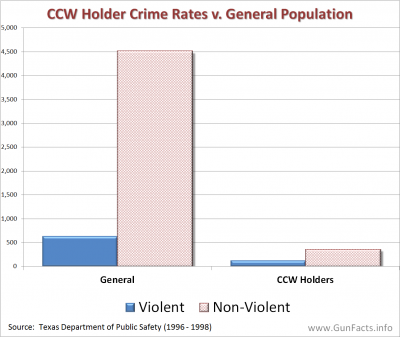 Fact: Most arrests cited are not any form of violent crime (includes bounced checks or tax delinquency). 31

Fact: Many of these arrests in this premature VPC “study” came in the early years of Texas CCWs when the law was not understood by most of the law enforcement community or prosecutors.

Fact: Compared to the entire population, Texas CCW holders are about 7.6 times less likely to be arrested for a violent crime. 32 The numbers breakdown as follows:

Fact: “I lobbied against the law in 1993 and 1995 because I thought it would lead to wholesale armed conflict. That hasn’t happened. All the horror stories I thought would come to pass didn’t happen. No bogeyman. I think it’s worked out well, and that says good things about the citizens who have permits. I’m a convert.” 35

Fact: “It has impressed me how remarkably responsible the permit holders have been.” 36 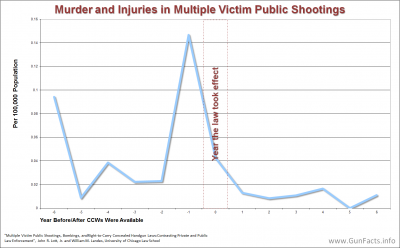 Fact: Of all the alternatives to preventing mass public shootings, police officers believe that civilian concealed carry is the most effective.” 38

Fact: 77% of all violent crime occurs in public places. 40  This makes concealed carry necessary for almost all self-defense needs. But due to onerous laws forbidding concealed carry, only 26.8% of defensive gun uses occurred away from home. 41

Fact: Often, small weapons that are capable of being concealed are the only ones usable by people of small stature or with physical disabilities.

Fact: The average citizen doesn’t need a Sport Utility Vehicle, but driving one is arguably safer than driving other vehicles. Similarly, carrying a concealable gun makes the owner — and his or her community — safer by providing protection not otherwise available.

Fact: 56% of Americans say more concealed weapons would make country safer. 42 Millions of Americans have concealed carry permits, and this doesn’t include people who carry in states that do not require permits.

Myth: Police and prosecutors are against concealed carrying by citizens

Fact:  In a survey of 15,000 officers, 91% said concealed carry should be permitted citizens “without question and without further restrictions.” 43

Fact: “All the horror stories I thought would come to pass didn’t happen …I think it’s worked out well, and that says good things about the citizens who have permits.  I’m a convert.” 45

Fact: “I … [felt] that such legislation present[ed] a clear and present danger to law-abiding citizens by placing more handguns on our streets. Boy was I wrong. Our experience in Harris County, and indeed statewide, has proven my fears absolutely groundless.” 46

Fact: “Virginia has not turned into Dodge City.  We have not seen a problem.” 47

Fact: “The concerns I had – with more guns on the street, folks may be more apt to square off against one another with weapons – we haven’t experienced that.” 48

Fact: “… to the best of my knowledge, we have not had an issue.  I had expected there would be a lot more problems … But it has actually worked out.” 49

Fact: “Coming from California [where he was on the Los Angeles police force for 28 years], where it takes an act of Congress to get a concealed weapon permit, I got to Maine, where they give out lots of carrying concealed weapon permits, and I had a stack of CCW permits I was denying; that was my orientation. I changed my orientation real quick. Maine is one of the safest places in America. Clearly, suspects knew that good Americans were armed.” 50