Fact: Though the number of firearms owned by private citizens has been increasing steadily since 1970, the overall rate of homicides and suicides has not risen (though suicide rates did start to rise during the Great Recession). 1 As the chart shows, there is no correlation between the availability of firearms and the rates of homicide and suicide in America.

Fact: “A detailed study of the major surveys completed in the past 20 years or more provides no evidence of any relationship between the total number of legally held firearms in society and the rate of armed crime. Nor is there a relationship between the severity of controls imposed in various countries or the mass of bureaucracy involved with many control systems with the apparent ease of access to firearms by criminals and terrorists.” 3

Fact: Among inmates who used a firearm in the commission of a crime, the most significant correlations occurred when the inmates’ parents abused drugs (27.5%) and when inmates had friends engaged in illegal activities (32.5% for robberies, 24.3% for drug trafficking). 5

Fact: Five out of six gun-possessing felons obtained handguns from the secondary market and by theft, and “[the] criminal handgun market is overwhelmingly dominated by informal transactions and theft as mechanisms of supply.” 6

Fact: The majority of handguns in the possession of criminals are stolen, and not necessarily by the criminals in question. 7 In fact, over 100,000 firearms are stolen in burglaries every year, and most of them likely enter the criminal market (i.e., are sold or traded to criminals). 8 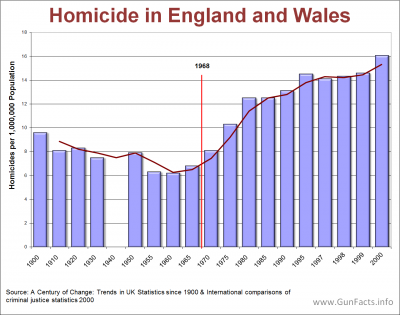 Fact: In 1968, the U.K. passed laws that reduced the number of licensed firearm owners, and thus reduced firearm availability. U.K. homicide rates have steadily risen since then. 9 Ironically, firearm use in crimes has doubled in the decade after the U.K. banned handguns. 10

Fact: Most violent crime is caused by a small minority of repeat offenders. One California study found that 3.8% of a group of males born in 1956 were responsible for 55.5% of all serious felonies. 11 75-80% of murder arrestees have prior arrests for a violent (including non-fatal) felony or burglary. On average, they have about four felony arrests and one felony conviction.

Fact: Per capita firearm ownership rates have risen steadily since 1959 while crime rates have gone up and down depending on economics, drug trafficking innovations, and “get tough” crime legislation. 14

Thoughts: Criminals are not motivated by guns. They are motivated by opportunity. Attempts to reduce public access to firearms provide criminals more points of opportunity. It is little wonder that high-crime cities also tend to be those with the most restrictive gun control laws – which criminals tend to ignore. 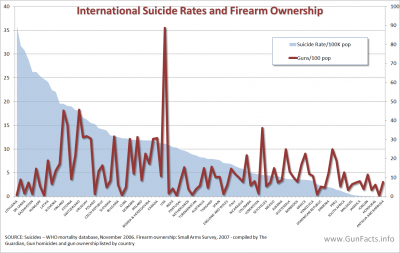 Fact: Cross national studies show that there is no relationship to suicides rates and the availability of firearms. Two outstanding contrasts:

Myth: Gun availability is what is causing school shootings

Fact: Schoolyard shootings have been occurring since at least 1974, so it is not a new phenomenon due to increases in gun ownership. 15

Fact: More than 50% of these murderers started thinking about their assaults two or more weeks before the shooting, and 75% planned-out their attacks, showing that these events are not spontaneous. 16

Thoughts: In rural areas, guns are everywhere, and children are taught to shoot at young ages – yet these areas are almost devoid of schoolyard shootings.  Clearly, availability is not the issue.

Fact: In 62% of mass public shootings, the assailant had a history of having “displayed signs of mental health problems prior to the killings.” 17

Fact: This “study” 18 has multiple defects which, when corrected, reverse the results. Some of the defects of this study include:

Myth: Handguns are 43 times more likely to kill a family member than a criminal

Fact: Of the 43 deaths reported in this flawed study, 37 (86%) were suicides.  Other deaths involved criminal activity between the family members (botched drug deals). 19

Fact: Of the remaining deaths, the deceased family members include felons, drug dealers, violent spouses committing assault, and other criminals. 20

Fact: Only 0.1% of the defensive uses of guns results in the death of the predator. 21  This means you are much more likely to prevent a crime without bloodshed than hurt a family member.