Fact: In America, we can demonstrate that private ownership of guns reduces crime, but from country to country there is no correlation between gun availability and the violent crime rate. Consider this:

Or, to use detailed data, we can contrast the per capita homicide rate with the per capita gun ownership rate between different industrialized countries (see graph below). Contrasting the data shows zero correlation between the availability of guns and the overall homicide rate.

Fact: Countries with the strictest gun-control laws also tended to have the highest homicide rates. 1

Fact: According to the U.N., as of 2005, Scotland was the most violent country in the developed world, with people three times more likely to be assaulted than in America. Violent crime there has doubled over the last 20 years. 3% of Scots had been victims of assault compared with 1.2% in America. 2

Fact: “… the major surveys completed in the past 20 years or more provides no evidence of any relationship between the total number of legally held firearms in society and the rate of armed crime. Nor is there a relationship between the severity of controls imposed in various countries or the mass of bureaucracy involved with many control systems with the apparent ease of access to firearms by criminals and terrorists.” 3 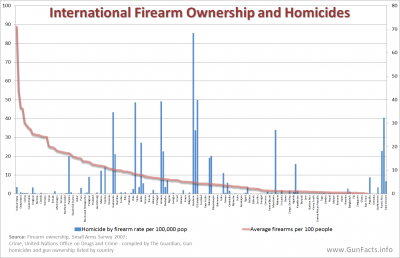 Fact: Even if we examine just firearm ownership and firearm homicide by country, we see no correlation between the two. 4

Fact: Switzerland has relatively lenient gun control for Europe 5, and has the third-lowest homicide rate of the top nine major European countries, and the same per capita rate as England and Wales, where restrictions are much tighter. 6

Fact: Indeed, the Swiss basically have a military rifle in nearly every closest. “Everybody who has served in the army is allowed to keep their personal weapon, even after the end of their military service.” 7

Fact: “We don’t have as many guns [in Brazil] as the United States, but we use them more.” 8 Brazil has mandatory licensing, registration, and maximum personal ownership quotas. It now bans any new sales to private citizens. Their homicide rate is almost three (3) times higher than the U.S. 9 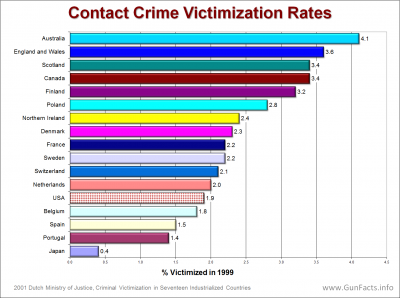 Fact: The crime rate is 66% higher in four Canadian Prairie Provinces than in the northern US states across the border. 14

(see notes about the odd nature of British crime statistics)

Fact: The United Kingdom has always had a lower homicide rate than the United States, even when British citizens could legally buy machine guns (Briton’s modern era of gun control did not ramp up until the 1960s). The difference is cultural, not legal.

Fact: Since gun banning has escalated in the UK, the rate of crime – especially violent crime – has risen.

Fact: Ironically, firearm use in crimes in the UK has doubled in the decade since handguns were banned. 17

Fact: 67% of British residents surveyed believed that “As a result of gun and knife crime [rising], the area I live in is not as safe as it was five years ago.” 19

Fact: “… [There is] nothing in the statistics for England and Wales to suggest that either the stricter controls on handguns prior to 1997 or the ban imposed since have controlled access to such firearms by criminals.” 22

Fact: Comparing crime rates between America and Britain is fundamentally flawed. In America, a gun crime is recorded as a gun crime. In Britain, a crime is only recorded when there is a final disposition (a conviction). All unsolved gun crimes in Britain are not reported as gun crimes, grossly undercounting the amount of gun crime there. 23 To make matters worse, British law enforcement has been exposed for falsifying criminal reports to create falsely lower crime figures, in part to preserve tourism. 24

Fact: An ongoing parliamentary inquiry in Britain into the growing number of black market weapons has concluded that there are more than three million illegally held firearms in circulation – double the number believed to have been held 10 years ago – and that criminals are more willing than ever to use them. One in three criminals under the age of 25 possesses or has access to a firearm. 25

Fact: Handgun homicides in England and Wales reached an all-time high in 2000, years after a virtual ban on private handgun ownership. More than 3,000 crimes involving handguns were recorded in 1999-2000, including 42 homicides, 310 cases of attempted murder, 2,561 robberies and 204 burglaries. 26

Fact: Between 1997 and 1999, there were 429 murders in London, the highest two-year figure for more than 10 years – nearly two-thirds of those involved firearms – in a country that has virtually banned private firearm ownership. 28

Fact: “… the scale of gun crime in the capital [London] has forced senior officers to set up a specialist unit to deal with … shootings.” 32 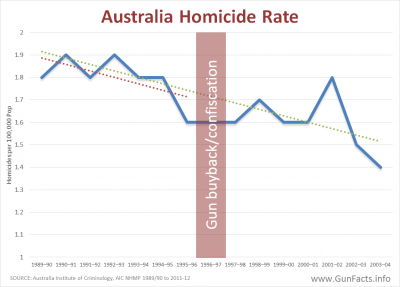 Fact: Homicides were falling before the Australian firearm ban. In the seven years before and after the Australian ban, the rate of decline was identical (down to four decimal places). Homicides dropped steeply starting in 2003, but all of this decline was associated with non-firearm and non-knife murders (fewer beatings, poisonings, drownings, etc.). 33

Fact: Crime has been rising since enacting a sweeping ban on private gun ownership. In the first two years after the ban, government statistics showed a dramatic increase in criminal activity. 34 In 2001-2002, homicides were up another 20%. 35

From the inception of firearm confiscation to March 27, 2000, the numbers are:

The sad part is that in the 15 years before the national gun confiscation:

Fact: Gun crimes have been rising throughout Australia since guns were banned. In Sydney alone, robbery rates with guns rose 160% in 2001, more than in the previous year. 36

Fact: A ten-year Australian study has concluded that firearm confiscation had no effect on crime rates. 37 A separate report also concluded that Australia’s 1996 gun control laws “found [no] evidence for an impact of the laws on the pre-existing decline in firearm homicides” 38 and yet another report from Australia for a similar time period indicates the same lack of decline in firearm homicides. 39
Fact: Despite having much stricter gun control than New Zealand (including a near ban on handguns) firearm homicides in both countries track one another over 25 years, indicating that gun control is not a control variable. 40

Fact: In Japan, the total murder rate is almost 1 per 100,000. In the U.S., there are about 3.2 murders per 100,000 people each year by weapons other than firearms. 41 This means that even if firearms in the U.S. could be eliminated, the U.S. would still have three times the murder rate of the Japanese.

Fact: Though illegal, side-street gun makers thrive in the Philippines, primarily hand crafting exact replicas of submachine guns, which are often the simplest type of gun to manufacture. Estimates are that almost half of all guns in the Philippines are illegal. 42

Myth: The United States has the highest violence rate because of lax gun control 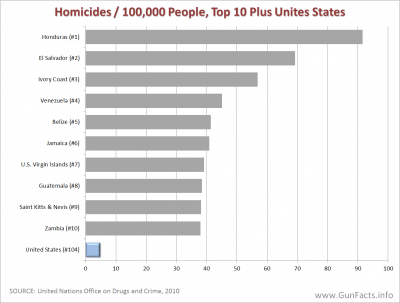 Fact: The top 100 countries for homicide do not include the U.S. 44 The top ten countries all have near or total firearm bans.

Myth: The U.S. has the highest rate of firearm deaths among 25 high-income countries

Fact: 60% of American “gun deaths” are suicides 45 and the U.S. has a suicide rate 11% higher 46 than international averages. This accounts for most of the difference.

Fact: The U.S. has a violent crime rate lower than 12 of 17 industrialized countries 47 due in large part to the 2.5 million annual defense gun uses. 48

Myth: The United States is the source of 90% of drug syndicate guns in Mexico

Fact: This is an often-misquoted data point from the BATFE, who said 90% of the firearms that have been interdicted in transport to Mexico or recovered in Mexico came from the United States. Thus, the 90% number includes only the firearms American and Mexican police stop in transport. 49

Fact: The original 90% number was derived from the number of firearms successfully traced, not the total number of firearms criminally used. For 2007-2008, Mexican officials recovered approximately 29,000 firearms from crime scenes and asked for BATFE traces of 11,000. Of those, the BATFE could trace roughly 6,000 of which 5,114 were confirmed to have come from the United States. Thus, 83% of the crime guns recovered in Mexico have not been or cannot be traced to America and the real number is most likely 17%. 50

Fact: Mexican drug syndicates can buy guns anywhere. For the relatively under-powered civilian rifles coming from the United States, drug runners would pay between 300% and 400% above the market price. Thus, they can and are buying guns around the world. 51

Fact: Mexican drug cartels – with $40 billion in annual revenues – have military armament that includes hand grenades, grenade launchers, armor-piercing munitions, antitank rockets and assault rifles smuggled in from Central American countries. 52 These are infantry weapons bought from around the world and not civilian rifles from the United States.

Myth: Mexico seizes 2,000 guns a day from the United States

Myth: Thousands of guns go into Mexico from the U.S. every day

Fact: In Senate Committee testimony, the BAFTE said the number was likely at worst to be in the “hundreds”. 54 As evidenced above, for 2007 and 2008, the average for all firearms seizures was closer to 40 per day (29,000 guns/730 days), and only a fraction of these came from the USA by any means.