Basic to the debates on gun control is the fact that most violent crime is committed by repeat offenders.  Dealing with recidivism is key to solving violence.

Most gun violence is between criminals. This should be the public policy focus.

Fact: Less than 1% of crime guns are acquired at gun shows, according to the Bureau of Justice Statistics. 5

Fact: Only 7.3% of traced guns were recovered from the individual who first bought the gun. 6

Fact: One study 7of adult offenders living in Chicago or nearby determined that criminals obtain most of their guns through their social network and personal connections. Rarely is the proximate source either direct purchase from a gun store, or even theft. This agrees with other, broader studies of incarcerated felons.

Fact: Another city-wide study, 8 this one in Pittsburgh, showed that 80% of people illegally carrying guns were prohibited from possessing guns, and that a minimum of 30% of the guns were stolen.

Fact: Other common arrangements include sharing guns and holding guns for others. 9

Myth: Guns are not a good deterrent to crime 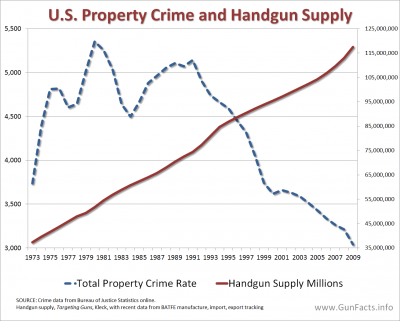 Fact: Guns prevent an estimated 2.5 million crimes a year or 6,849 every day. 10 Most often, the gun is never fired and no blood (including the criminal’s) is shed.

Fact: Felons report that they avoid entering houses where people are at home because they fear being shot. 13

Fact: 26% of all retail businesses report keeping a gun on the premises for crime control. 18

Fact: In 1982, Kennesaw, GA passed a law requiring heads of households to keep at least one firearm in the house. The residential burglary rate dropped 89% the following year. 19

Fact: A survey of felons revealed the following: 20 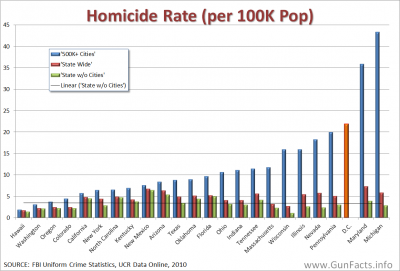 Fact: Even in crimes where the offender possessed a gun during the commission of the crime, 83% did not use or threaten to use the gun. 22

Fact: Fewer than 1% of firearms will ever be used in the commission of a crime. 23

Fact: Two-thirds of the people who die each year from gunfire are criminals being shot by other criminals. 24

Fact: Cincinnati’s review of their gang problem revealed that 74% of homicides were committed by less than 1% of the population. 25

Fact: Most gun crimes are gang related, and as such are big-city issues. In fact, if mayors in larger cities were more diligent about controlling gang warfare, state and nationwide gun violence rates would fall dramatically.

Myth: 40% of Americans have been or personally know a gun violence victim

Fact: This data was from an unpublished survey conducted by a political research organization. Their own footnote reads “Greenberg Quinlan Rosner Research for the New Venture Fund (Aug. 2011). Note, this is not publicly available data.” 28

Fact: The BATF reports that the average age of a traced gun is 11 years 29, meaning that most guns moving from state to state were transported when legal owners moved.

Fact: Fewer than 5% of traced guns in California, many of which were not crime guns, came from neighboring Nevada and Arizona. 30

Fact: This was the conclusion of the Johns Hopkins University Center for Gun Policy and Research – and it is wrong. They studied firearm homicide rates from Maryland after passage of a “Saturday Night Special” ban in 1998. It seems the firearm homicide rate has not subsided and remained between 68-94% higher than the national average through 2008. 32

Fact: Even banning guns does not slow down criminals. In the U.K., where private ownership of firearms is practically forbidden, criminals have and use guns regularly, and even build their own. One enterprising fellow converted 170 starter pistols to functioning firearms and sold them to gangs. Hundreds of such underground gun factories have been established, contributing to a 35% jump in gun violence. 33

Fact: “Saturday Night Specials” were used in fewer than 3% of crimes involving guns. 35

Fact: Fewer than 2% of all “Saturday Night Specials” made are used in crimes.

Fact: “What was available was the overriding factor in weapon choice [by criminals].” 36

Fact: Only 0.8% of convicts bought their firearms at gun shows. 39.2% obtained them from illegal street dealers. 37

Fact: The FBI concluded in one study that no firearms acquired at gun shows were used to kill police. “In contrast to media myth, none of the firearms in the study were obtained from gun shows.” 40

Fact: Only 5% of metropolitan police departments believe gun shows are a problem. 41

Fact: Only 3.5% of youthful offenders reported that they obtained their last handgun at a gun show. 42

Fact: At most, 14% of all firearms traced in investigations were purchased at gun shows. 44 But this includes all firearms that the police traced, whether or not they were used in crimes, which overstates the acquisition rate.

Fact: Gun dealers are federally licensed. They are bound to stringent rules for sales that apply equally whether they are selling  firearms from a storefront or a gun show. 45

Fact: Most crime guns are either bought off the street from illegal sources (39.2%) or through straw-man purchases by family members or friends (39.6%). 46

Myth: All four guns used at Columbine were bought at gun shows

Fact: Each of the guns was either bought through an intermediary or someone who knew they were going to underage buyers. In all cases there was a purposeful criminal activity occurring and the actors knew they were breaking the law.

Myth: 25-50% of the vendors at most gun shows are “unlicensed dealers”

Fact: There is no such thing as an “unlicensed dealer,” except for people who buy and sell antique — curio — firearms as a hobby (not a business).

Fact: This 25-50% figure can only be achieved if you include those dealers not selling guns at these shows. These non-gun dealers include knife makers, ammunition dealers, accessories dealers, military artifact traders, clothing vendors, bumper-sticker sellers, and hobbyists. In short, 50% of the vendors at shows are not selling firearms at all!

Fact: The main study that makes this claim had no scientific means for determining what sales at the show were “straw sales.” Behaviors that Dr. Wintemute cited as “clear evidence” of a straw purchase were observational only and were more likely instances of more experienced acquaintances helping in a purchase decision. No attempts were made to verify that the sales in question were straw sales. 47

Fact: Why does crime rise when criminals are released from prison early? Because they are likely to commit more crimes. 67.5% were re-arrested for new felonies or serious misdemeanors within three years. Extrapolating, those released felons killed another 2,282 people. 48

Fact: 45% of state prisoners were, at the time they committed their offense, under conditional supervision in the community – either on probation or on parole. 49 Keeping violent convicts in prison would reduce violent crimes.

Fact: Homicide convicts serve a little more than half of their original sentences. 50 Given that men tend to be less prone to violent behavior as they age, 51 holding them for their full sentences would probably reduce violence significantly.

Fact: The “time-to-crime” of a firearm is about 11 years, making it rare that a newly purchased firearm is used in a crime. 54

Fact: The national five-day waiting period under the Brady Bill had no impact on murder or robbery. In fact, there was a slight increase in rape and aggravated assault, indicating no effective suppression of certain violent crimes. Thus, for two crime categories, a possible effect was to delay law-abiding citizens from getting a gun for protection. The risks were greatest for crimes against women. 55

Fact: Those statistics came from a pair of surveys reported by gun control group Mayors Against Illegal Guns, who has been caught stacking survey responses by polling left-of-center mailing lists.

Fact: There is no such thing as a ‘plastic gun’. This myth started in 1980 57 when Glock began marketing a handgun with a polymer frame, not the entire firearm. Most of a Glock is metal (83% by weight) and detectable in common metal and x-ray detectors. “[D]espite a relatively common impression to the contrary, there is no current non-metal firearm not reasonably detectable by present technology and methods in use at our airports today, nor to my knowledge, is anyone on the threshold of developing such a firearm.” 58

Incidentally, Glocks are one of the favorite handguns of police departments because it is lightweight, thanks to the polymer frame.

Fact: In the drug-ridden Miami of 1980, fewer than 1% of all gun homicides were with machine guns. 60

Fact: None of over 2,220 firearms recovered from crime scenes by the Minneapolis police in 1987-89 were machine guns. 61

Fact: Only 0.5% of the reported traces were for an original purchase of three years or less before the trace was conducted. 63 Thus, 99.5% of retailer sales had left their control long before the gun was traced (and many traces are not for crime guns).

Fact: The average “time to crime”, the time between the retail sale of a firearm and its use in a crime is eleven years. A firearm can change hands and travel far in six years.