Myth: Private ownership of guns is not effective in preventing crime

Fact: Every year, people in the United States use guns to defend themselves against criminals an estimated 2,500,000 times – more than 6,500 people a day, or once every 13 seconds. 1  Of these instances, 15.7% of the people using firearms defensively stated that they “almost certainly” saved their lives by doing so.

Fact: Even the government’s estimate, which has a major methodology problem, 2 estimates people defend themselves 235,700 times each year with guns. 3

Fact: The number of times per year an American uses a firearm to deter a home invasion alone is 498,000. 4

Fact: In 83.5% (2,087,500) of these successful gun defenses, the attacker either threatened or used force first, proving that guns are very well suited for self-defense. 5

Fact: The rate of defensive gun use (DGU) is six times that of criminal gun use. 6

Fact:  Of the 2,500,000 times citizens use guns to defend themselves, 92% merely brandish their gun or fire a warning shot to scare off their attackers. 7

Fact:  In most of the remaining 8% of defensive gun uses, a citizen never wounds his or her attacker (they fire warning shots), and in less than one in a thousand instances is the attacker killed. 8

Fact: 41% of justifiable homicides using a gun were by private citizens, the others by law enforcement. 9

Fact: In one local review of firearm homicide, more than 12% were civilian legal defensive homicides. 10

Myth: The small number of self-defense killings shows that private gun ownership does nothing

Fact: Most DGUs do not involve firing a gun. The average private gun owner who uses guns for self defense take non-fatal actions, such as brandishing the weapon. In other instances, they may fire a warning shot or intentionally would their attacker. 15

Myth: Only police should have guns 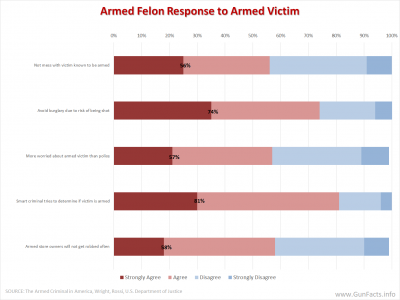 Fact: “Most criminals are more worried about meeting an armed victim than they are about running into the police.” 16

Fact: For kids in schools, police end such attacks only 27% of the time. 17

Fact: Police have trouble keeping their own guns.  Hundreds of firearms are missing from the FBI and 449 of them have been involved in crimes. 19

Fact: People who saw the helplessness of the L.A. Police Department during the 1992 King Riots or the looting and violence in New Orleans after hurricane Katrina know that citizens need guns to defend themselves.

Fact: “In actual shootings, citizens do far better than law enforcement on hit potential. They hit their targets and they don’t hit other people. I wish I could say the same for cops. We train more, they do better.” 20 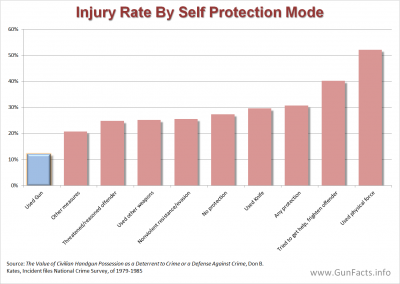 Myth: You are more likely to be injured or killed using a gun for self-defense

Fact: You are far more likely to survive violent assault if you defend yourself with a gun. 21

Myth: Guns are not effective in preventing crime against women

Fact: When a woman was armed with a gun or knife, only 3% of rape attacks were completed, compared to 32% when the woman was unarmed. 22

Fact: The probability of serious injury from an attack is 2.5 times greater for women offering no resistance than for women resisting with guns. Men also benefit from using guns, but the benefits are smaller: Men are 1.4 times more likely to receive a serious injury. 23

Fact: In 1966, the city of Orlando responded to a wave of sexual assaults by offering firearms training classes to women. Rapes dropped by nearly 90% the following year. 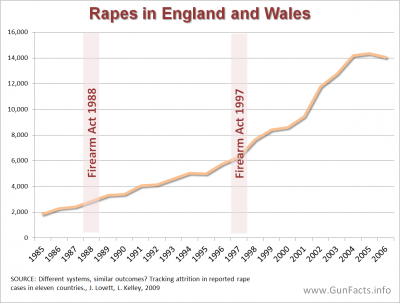 Fact: More Americans believe having a gun in the home makes them safer. This belief grows every year the survey is taken. 26

Fact: Arthur Kellerman, a researcher whose work is often cited by gun control groups, said “If you’ve got to resist, your chances of being hurt are less the more lethal your weapon. If that were my wife, would I want her to have a .38 Special in her hand? Yeah.” 27