Myth: More police officers are killed on duty in states with more guns 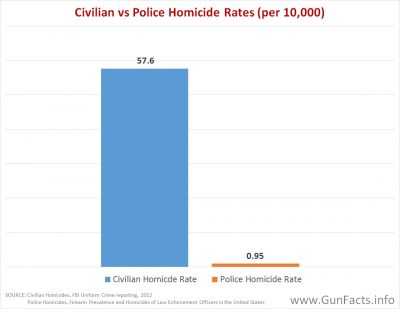 Fact: Police homicide rates are so low that statistical analysis begs inaccuracies due to the rareness of such killings. Using the study that made this claim 1 the rate of civilian homicides was 60 times that of police officers, using the highest rate of police homicides. 2 To give you an idea of how small the numbers are, a mere 47 officers were killed with guns in 2014 (excluding firearm accidents). 3 Thus, the researchers were attempting to compare police homicides for each state when, on average, there was less than one such homicide per state.

Fact: The National Association of Chiefs of Police polled its members 4 and determined that:

Fact: 94% of law enforcement officials believe that citizens should be able to purchase firearms for self-defense and sporting purposes. 5

Fact: In a survey of 15,000 law enforcement professionals: 6

Fact: 65.8% believe there should be no gun rationing, such as ‘one gun per month’ schemes.

Fact: 97.9% of police officers believe criminals are able to obtain any type of firearm through illegal means.

Fact: “Gun control has not worked in D.C. The only people who have guns are criminals. We have the strictest gun laws in the nation and one of the highest murder rates. It’s quicker to pull your Smith & Wesson than to dial 911 if you’re being robbed.” 7

Fact: The courts have consistently ruled that the police do not have an obligation to protect individuals. In Warren v. District of Columbia Metropolitan Police Department, 444 A.2d 1 (D.C. App. 1981), the court stated “… courts have without exception concluded that when a municipality or other governmental entity undertakes to furnish police services, it assumes a duty only to the public at large and not to individual members of the community.”

Fact: The United States Department of Justice found that, in 1989, there were 168,881 crimes of violence for which police had not responded within 1 hour.

Fact: 95% of the time police arrive too late to prevent a crime or arrest the suspect. 11

Fact: 75% of protective/restraining orders are violated and police often won’t enforce them unless they witness the violation. 12

Fact: Despite prompt law enforcement responses, most armed and violent attacks at schools were stopped by means other than law enforcement intervention. 13 Often these interventions were by administrators, teachers, or other students who were licensed to carry firearms.

Myth: The supply of guns is a danger to law enforcement

Fact: The courts kill cops by letting felons out of prison early.  Of police killed in the line of duty:

Fact: KTW rounds, wrongly labeled as “cop killer” bullets, were designed by police officers 14, for use by police to penetrate hard targets like car windshields.  KTWs have never been sold to the general public. 15