Myth: There have been 96 school shootings since Sandy Hook

Fact: This analysis of news reports was created by the gun control group Everytown. This study included:

Some other analysts note that many of the cases are unrelated to school activity or actually occurred near campus, not on it. All in all, it is a poor study with no relevance to child endangerment.

Fact: This Education Department “study” 1 was utterly botched, to the point where they logged 16 shooting of one school district, but an NPR investigation 2showed zero. In 161 cases, schools or districts attested that no incident took place. In at least four cases, something did happen, but it didn’t meet the government’s parameters for a shooting.

Myth: 13 children are killed each day by guns

Fact: Adults included – This “statistic” includes “children” up to age 19 or 24, depending on the source. 3 Since most violent crime is committed by males ages 16-24, the “13 children” number includes adult gang members dying during criminal activity.  The proper definition of ‘child’ is a person between birth and puberty (typically 13-14 years old) and in 2013 only 1 child was killed on an average day nationwide, or about 0.02 children per state per day. 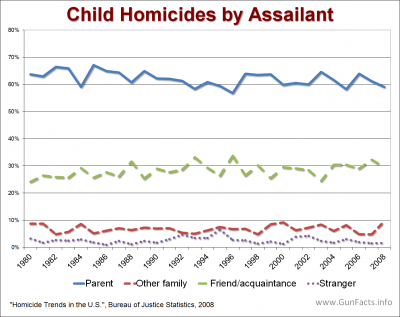 Fact: 411 children (age 14 and under) died from gunfire in all of 2012 or slightly more than one per day. This includes homicides, accidents, and suicides combined. 4

Fact: Criminals are included – According to the CDC, over half of all homicides of victims aged 15-19 are gang-related. The same study found that gang-related homicides are more likely to involve firearms than those that are not (95% versus 69%). 5 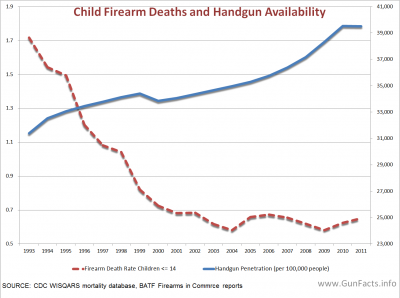 Fact: This study 11, published by a medical student, used a non-standard database (not official CDC records), did not analyze other variables (multi-variant analysis) and did not specify regional co-variance in gun ownership. In short, shabby science.

Myth: Schoolyard shootings are an epidemic

Fact: “Compared to other types of violence and crime children face, both in and outside of school, school-based attacks are rare.  While the Department of Education reports 60 million children attend the nation’s 119,000 schools, available statistics indicate that few of these students will fall prey to violent situations in school settings.” 12

Fact: Over an eight year period, in states without “right to carry” laws, there were 15 school shootings; however, in states that allow citizens to carry guns, there was only one. 13

Fact: The five school shootings that occurred during the ’97-98 school year took place after the 1995 Gun-Free School Zones law was enacted, which banned guns within 1,000 feet of a school. 14 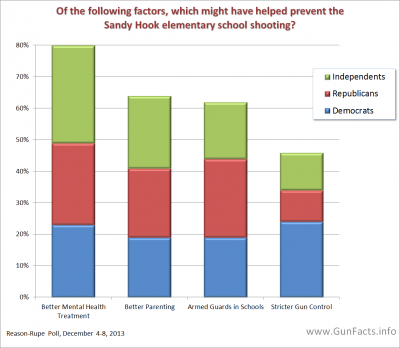 Fact: Schoolyard shooting deaths are not rising, rather; they have been falling through most of the 1990s: 15

Fact: Only 10% of public schools reported one or more serious violent crimes during the 1996-97 school year. 16

Fact: Similar prevention occurred at a school dance in Edinboro, Pennsylvania, the Appalachian School of Law and during classes in Santee, California.

Myth: Trigger locks will keep children from accidentally shooting themselves

Fact: 31 of 32 models of gun locks tested by the government’s Consumer Product Safety Commission could be opened without the key. According to their spokesperson, “We found you could open locks with paper clips, a pair of scissors or tweezers, or you could whack them on the table and they would open.” 17

Fact: In 1996, before laws requiring trigger locks and when there were around 80 million people who owned a firearm, there were only 44 accidental gun deaths for children under age 10, or about 0.0001%. 19

Fact: California has a trigger lock law and saw a 12% increase in fatal firearm accidents in 1994. Texas didn’t have one and experienced a 28% decrease in the same year. 20

Fact: Children as young as seven (7) years old have demonstrated that they can pick or break a trigger lock; or that they can operate a gun with a trigger lock in place. 21 Over half of non-criminal firearm deaths for children over age seven are suicides, so trigger locks are unlikely to reduce these deaths.

Fact: If criminals are deterred from attacking victims because of the fear that people might be able to defend themselves, gun locks may in turn reduce the danger to criminals committing crime, and thus increase crime. This problem is exacerbated because many mechanical locks (such as barrel or trigger locks) also require that the gun be stored unloaded.

Fact: This statistic includes “children” ages 18-19. 24 As established previously, a child is defined as a person between birth and the age of 13 or 14 (puberty). 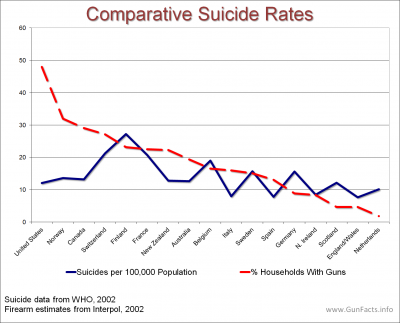 Fact: Worldwide, the per capita suicide rate is fairly static (the suicide rate of the U.S. is lower than many industrial countries, including many where private gun ownership is banned). A certain fraction of the population will commit suicide regardless of the available tools.

Fact: The overall rate of suicide (firearm and non-firearm) among children age 15 and under was virtually unchanged in states that passed and maintained “safe storage” laws for four or more years. 25

Fact: Among young girls, 71% of all suicides are by hanging or suffocation. 26

Fact: People, including children, who are determined to commit suicide will find a way. There is a documented case of a man who killed himself by drilling a hole in his skull by using a power drill. 27

Fact: Banning country music might be more effective – one study shows 51% of the music-influenced suicide differential can be traced to country music. 28

Fact: Harris and Klebold violated close to 20 firearms laws in obtaining weapons.  Would 21 laws really have made a difference?  The two shotguns and one rifle used by Harris and Klebold were purchased by a girlfriend who passed a background check, and the TEC-9 handgun used was already banned.

Fact: The trends after two major federal gun-free school zone acts show that they have no effect. Indeed, the number of campus shooting events, the number of people killed, and even the number of mass shootings (albeit statistically fragile) have increased.

Myth: Children should be kept away from guns for their own safety

Fact: 0% of children that get guns from their parents commit gun-related crimes while 21% of those that get them illegally do. 29

Fact: Children that acquire firearms illegally are twice as likely to commit street crimes (24%) than are those given a firearm by their parents (14%). 30

Fact: Almost three times as many children (41%) consume illegal drugs if they also obtain firearms illegally, as compared to children given a firearm by their parents (13%).

Fact: In the 1950’s, children routinely played cops and robbers, had toy guns, were given BB rifles and small caliber hunting rifles before puberty. Yet the homicide rate in the 1950’s was almost half of that in the 1980’s. 31

Myth: More children are shot and killed in the U.S. than anywhere else

Fact: 380 children age 14 or under were killed with firearms 32 in 2010, or 0.0005% of the children in America and barely more than one child per day. Of those, 58% of those were homicides, likely innocent bystanders in drive-by scenarios.

Myth: More children are hurt with guns than by any other means 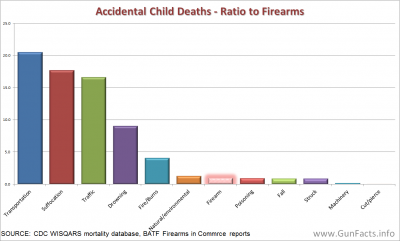 Fact: Barely more than 1% of all unintentional deaths for children in the U.S. between ages 0-14 are from firearms. 33

Fact: The Center for Disease Control, a federal agency, disagrees. According to them, in 1998, children 0-14 years died from the following causes in the U.S. 34

Fact: Children are 12 times more likely to die in an automobile accident than from gun-related homicides or legal interventions (being shot by a police officer, for example) if they are age 0-14. For the group 0-24 years old (which bends the definition of “child” quite a bit), the rate is still 8.6 times higher for cars. 35

Fact: In 2001, there were only 72 accidental firearm deaths for children under age 15, as opposed to over 2,100 children who drowned (29 times as many drowning deaths as firearm deaths). 36 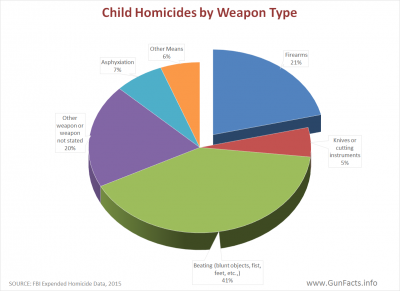 Fact: Boys who own legal firearms have much lower rates of delinquency and drug use than non-owners of guns. 38

Fact: The non-gun homicide rate of children in the U.S. is more than twice as high as in other western countries.  And eight times as many children die from non-gun violent acts than from gun crimes. 39 This indicates that the problem is violence, not guns.

Fact: 82% of homicides of children age 13 and under were committed without a gun. 42

Fact: This was the incorrect conclusion of a very odd and extremely limited study by a medical school (not a criminology study). The study used odd and atypical control variables, but it also concluded that urban residency was a better predictor.

Myth: If it saves the life of one child, it is worth it

Fact: Firearms in private hands are used an estimated 2.5 million times (or 6,849 times each day) each year to prevent crime; 43 this includes rapes, aggravated assaults, and kidnapping.  The number of innocent children protected by firearm owners far outweighs the number of children harmed.

Fact: Most Americans (firearm owners or not) believe that the way parents raise kids is what causes gun violence (or just violence in general).  Among non-firearm owners, 38% said it was parental neglect that causes youth violence, while only 28% thought it was due to the availability of guns. 44 They may be right, given that most homicides of children under age five are by their own parents. Of homicides among children ages 5 and younger; 31% were killed by their own mothers and another 31% were killed by their own fathers. 45