Why does California State Senator Lois Wolk choose to be ignorant? With her representing a college town you would hope otherwise. 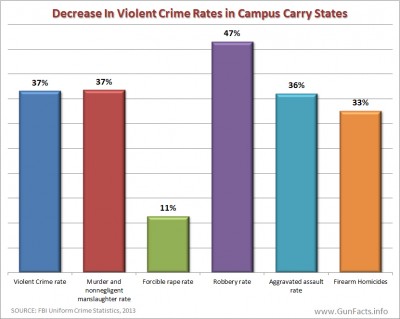 Wolk is campaigning to largely prevent the few folks with California concealed carry licenses (CCW) from exercising the right on campuses (the bill as currently drafted, subject to change no doubt, leaves it up to schools to set policy). Ignoring how this creates legal jeopardy for CCW holders unaware of shifting restrictions from place to place, the bigger question is “why?” The empirical data does not support the need to discriminate as Wolk wants to do.

In our recent Non-Brady State Scorecard report, we discovered that states that allow CCW holders to carry on campuses, both K12 public schools and college campuses, had significantly lower violent crime rates, including firearm homicides and all forms of murder. The effect is amplified in “college campus carry” states, indicating that a fair amount of murder, rape, robbery and assault that happens on or near college campuses is suppressed by the possibility of armed response.

In her own words, Wolk thinks “As concealed weapons permits are becoming more prevalent and easier to obtain, campus public safety officials need more authority to regulate them on campus grounds.” Yet her statement is made without justification. What precisely is the danger posed by CCW holders? Statistics tell us the opposite effect is in play; that CCW holders not only fail to cause problems, their very presence suppresses violent acts. In states where college campuses allow CCW holders equal access, murders are 37% lower, rapes are 11% less frequent, robbery drops 47% and aggravated assaults plunge 36%. Even firearm homicides drop 33%.

In the absence of a measurable problem, Wolk – like every politician before her – uses fear to motivate votes. But the empirical data shows that CCWs on campus is a non-existent problem and possibly part of the solution. This is what we know about CCW holders, from the available data:

The proper voter action at this point is to ignore Wolk and other fear mongers, and to insist on equal self-protection rights.