I love it when ideologues prove the oppositions’ point. 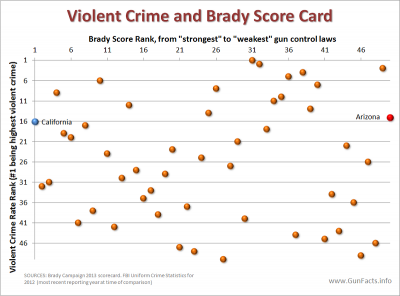 Every year the Brady Campaign – the aging gun control group with fading influence – publishes their scorecard of state gun control laws, listing which states have “strong” gun control and those with “weak” ones.

Every year it makes me chuckle.

The source of the humor is that a simple diagram shows the meaninglessness of their analysis. Every year I plot states by the Brady Campaign ratings against various forms of crime, and every year there is no covarience. None. It is a simple yet savory summary that gun control laws make no difference in crimes of violence.

But this year I noticed something I had never noticed before.

On the far left of the chart is California, state that the Brady Campaign believes has the strongest gun control laws. It ranks #1 according to Brady. On the right is #50, Arizona, the state with almost no gun control at all. [click to enlarge]

They have nearly identical violent crime rates. California has 423 violent crimes per every 100,000 residents and Arizona has 429. Not a dime’s worth of difference.

To my growing group of reporter friends: Don’t bother covering the Brady Campaign Scorecard story next year. The stats show that the story is meaningless.