“There are more gun stores in America than Starbucks and McDonalds combined.”

This was a headline from a propaganda organization within the gun control movement. As with any wild-sounding claim from either camp, the Gun Facts project took interest. A bit of data chasing and number crunching shows that the claim is marginally accurate yet totally misleading.

But what else would one expect from The Trace.

The analysis herein is a handy lesson in real-time propaganda analysis, so sit tight and enjoy the ride.

The common data source and the complications in understanding

Just what is a “gun store”? The definition chosen by The Trace represents the first departure in reality for the more excessive claims made by policy groups.

The federal government licenses gun makers, importers, gunsmiths and retailers as Federal Firearm Licensees (FFLs) and reports all of them on the BATF website. We grabbed the 2017 database for this bit of analysis.

When one reviews the list of every entity that has an active FFL, we see a lot of entities who are obviously not “gun stores.” This includes importers, dealers in non-gun products that go “boom,” companies that manufacture but don’t retail guns, people who make bullets, and those who collect antiques.

What remains are 64,575 companies or individuals with an FFL. This seemingly large number includes pawn shops (12% of the alleged “gun stores,” despite many pawn shops not actively buying or selling guns) and another group which is the most interesting topic we need to discuss.

Per federal law, a person or entity – be it Bass Pro Shop or your neighbor Bob – engaged in the “business” of dealing in, manufacturing, or importing firearms (or manufacturing or importing ammunition) must obtain an FFL. This includes a significant number of people who are not dealers per se, at least not in the sense that any reasonable person would perceive them to be. And they certainly are not “gun stores.”

The government requires you to get an FFL if you are “engaged in the business of…” However, they don’t define what that really means. Sure, if Guns’R’Us sells 10,000 guns a month from a storefront on Main Street, then they are certainly a “gun store.” If your cousin Jim buys and sells two guns a quarter, but advertises them online, he is certainly not a “gun store,” but will likely obtain an FFL to avoid running afoul of the poorly defined law. That is why there is an FFL in this satellite image. Cousin Jim lives in that nice little three-bedroom place near the corner (this is not a joke – we fed the address of the very first FFL flagged as not being in a commercial space into Google Maps, and this is where the “gun shop” is located). 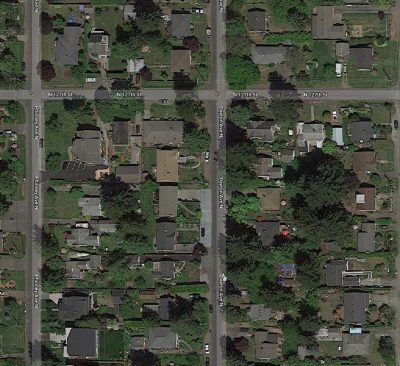 We took a representative sample of the FFLs (randomized, 95% confidence level, ±6% confidence interval) and fed the addresses to a “Residential Delivery Indicator” (RDI) search tool. This tool tells you if an address is residential or commercial. We discovered that of all the FFLs that were not in the aforementioned exclusion classes (curios, manufacturers, importers, etc.), there are more residential FFL holders than gun stores, by a 1.1:1 ratio. A total of 28,382 FFLs had actual commercial addresses, and not all of them were stores – many were in industrial parks where manufacturing occurs.

Now, here is a big gotcha. Not everyone with an FFL and a commercial address is actually a “gun store.” For example, a real FFL location called “Like Life Taxidermy” is in our analysis a “gun store.” So is “Wes’s Reloading” (ammo), “Towlesville Craft & Shaft,” “Kloesel Garage” and “Edwards Discount Drugs” (seriously, we are not making any of those up). And these are ones we saw on just the first page of the spreadsheet, along with “Wal-Mart Supercenter #2654” and several reading “NULL.”

For now, let’s just say that in this analysis, the count of “gun stores” is very overestimated.

Which is deadlier, a 9mm or a Big Mac?

Perspective is key, and the first thing you notice about The Trace’s headline is that their “perspective” is artificial. Whenever you see an artificial contrast, it is guaranteed to be hiding the true perspective.

Since everyone knows where to find a Starbucks or McDonald’s, saying that there are more gun stores than those restaurants combined makes one think there is a gun store on every corner (and there is a place on this planet where a Starbucks sits across the street from another Starbucks). But picture in your mind the last long drive you took through retailing regions of your town and how many gun stores you saw versus the number of Starbucks and McDonalds. Bet the former was zero and the latter was at least one.

Part of the problem is regionality. There are a slightly larger number of gun stores in Dallas than Manhattan… about a gizzilion to one. This map shows the disparity. The numbers say the average ratio of “gun stores” to Starbucks+McDonalds is 2.8:1, but on a state-by-state basis the range of ratios goes from nearly 11:1 (Go Montana!) to 0:1 (yep, Washington D.C.). So even making the “gun store”-to-restaurant comparison is a bit lame. It serves no rational purpose, even if it was not misleading.

In other words, “gun stores” are outgunned [Editor: Sorry, this punster went off half-cocked].

Why tell people, “There are more gun stores in America than Starbucks and McDonalds combined”? To scare them. Everyone knows where there is a Starbucks and most everyone knows where there is a McDonald’s (vegans might be ignorant of the latter). So, anyone one without proper perspective now thinks there are just as many gun stores. If you don’t like guns, you don’t like gun stores and The Trace has put you into an increased state of fear… which eases people past rational thought and into political action.