Who is more likely to shoot you, an NRA member or a member of the Crips? The primary difference between these two groups is culture. NRA members tend to be law-and-order types, whereas Crips (or members of any garden variety American street gang) are rather indifferent or openly hostile to laws. It is the adherence to a social norm – in this case, obeying or not obeying the law – that influences one’s probability to act violently, which in tern means using a gun to commit unilateral violence (e.g., not self-defense). We saw this in one study that details the propensity of people in poor and crime-ridden neighborhoods to get and use guns for criminal activities. But what cultural norms influence such behavior? We found a cross-national survey of culture and wanted to see if we could map similarities between nations concerning culture, violence and guns. The Main Take-Aways Gun … END_OF_DOCUMENT_TOKEN_TO_BE_REPLACED

When propagandists panic, they show their own paranoia. I was forwarded an email from Michael Bloomberg’s agitprop organization, Everytown. In this email, they stated with authentic dismay and dread that in some states you can order a beer in a bar while having a holstered sidearm (providing you have a concealed carry license, a.k.a. CCW). Sane people – which evidently excludes folks working for Bloomberg – would ask “Is this a problem?” Phrased more fully, “Do CCW holders enjoying an adult beverage in their corner watering hole cause problems?” The answer is no. In fact, stats show it might actually abate violence. Shots and Glasses In our Non-Brady Scorecard project (alas, no longer being published), we reviewed both pro- and anti-gun control laws, including allowing CCW holders to pack heat in pubs. Not many states allow this, but enough have had the law in place to at least get an … END_OF_DOCUMENT_TOKEN_TO_BE_REPLACED 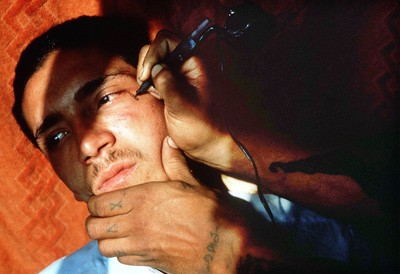 Are gangs on the run in Los Angeles? No, but their violence may be abating, and it has nothing to do with gun control. The state of California (a.k.a. the State of Emergency) recently published a pair of decadal crime reports. Buried in the data is evidence that despite a backward-thinking mania, California has enjoyed a drop in violence without an increase in gun control. At first blush, the decline appears to be uniquely tied to Los Angeles County, and to a brace of 1993 era laws that targeted criminals. The big take away is that from 2005 through 2012 (the latest date for which we can compare Cali stats against the rest of the nation) California violent crime has shrunk impressively. Part of this is due to the fact that the rest of America is not the violent cesspool known as L.A.! SoCal can only improve, edging ever closer … END_OF_DOCUMENT_TOKEN_TO_BE_REPLACED 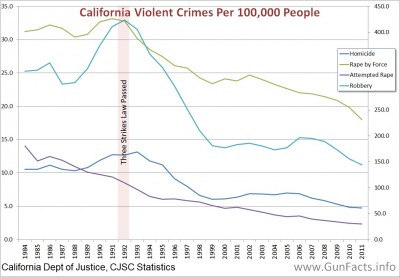 Some gun control groups claim that California’s drop in violent crime since the early 1990s is due to gun control. But a causal review of California gun-related legislation shows that when violent crime started falling in the Golden State, there was no significant gun control legislation. If not gun control, what then explains the drop in violent crime in general, and firearm crimes in particular starting around 1993. My preliminary research indicates it is traceable to California’s Three Strikes law and the firearm penalty enhancements passed in that same year. But it is worth digging into the data to see if we can understand why. Up to 1993, violent crime in California was significantly higher than the rest of the country. Like most other places, robbery was a leading cause of violent crime.  In fact, in the pivot year, robbery accounted for 38% of all violent crime. The rate of robbery as a subset of … END_OF_DOCUMENT_TOKEN_TO_BE_REPLACED