Even sullied terms can be analyzed. We came across a quality study that looks at “mass [not-just-public] shootings” and paints a not-quite-alarming story.

The term “mass public shooting” has had a multi-decade, criminology-derived definition (4+ dead, not including the perp, in a single public place). These events, tragic as they are, are very rare; and in terms of dead people, they account for a fraction of a fraction of gun homicides each year.

This fact has proved so inconvenient to some activist groups (including some activist media) that they started inventing their own definition of “mass shooting” – notice the omission of the word “public”– for they would have been virtually pilloried if they had used the full phrase.

“Mass shooting,” as opposed to “mass public shooting,” had no fixed criminology definition… until now. A new paper 1 circulated by the federal government studied all mass shootings, public and non-public, using a standardized definition (4+ dead, not including the perpetrator, within a 24-hour period). This definition might reduce the unintentional confusion the public has about “mass shootings,” though we fear it will not reduce the intentional confusion.

The first (and perhaps most enlightening) conclusion is, “There are no stark increases or decreases in the frequency of deadly mass shooting incidents (overall).”

We ground some numbers and were surprised by the slope of increase and decrease, in some of the circumstances. Total mass shootings are going upwards at an anemic rate of +0.1 (slope of line), felony related events are going down by -0.1, and mass public shootings (e.g., Sandy Hook, Las Vegas, etc.) are rising +0.1.
The troubling bit is that family shootings where four or more people die is going up at a slope rate of +0.3, the highest category and 3X that of all instances. There may be a bit of insight into the “why” of that later on, but for now our observation is that things are not really getting worse because even though the number of instances rose 11% (first five years, and last five years of the study averaged) the American population rose 44%.

Looked at differently, the rate of mass shootings per one million people in the country dropped from a five-year average of 0.08 to 0.06, a drop of 33%. For the statistical junkies, there is an R2 value of 0.12, a correlation too weak to entertain. 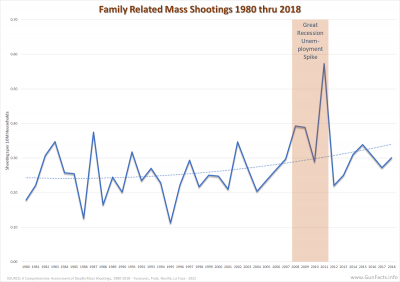 The other problem is that this rising rate is both a twenty-first-century problem and a “spikey data” one. Years 2008 thru 2011 had significantly higher family-related mass shootings than in previous or subsequent years. These were the years of the “Great recession” unemployment gloom in the wake of the 2008 subprime housing bust. It is not irrational to think that disrupted households (mortgages foreclosed, jobs lost, etc.) led to higher rates of family violence.

The most interesting (and in a way obvious) statement in the paper is, “Most of the victims of deadly mass shootings that are excluded from existing [mass PUBLIC shooting] research and dialogue are women and children, and individuals killed in high-crime communities.” As we see, there is skewing of mass shooting in family circumstances.

For all years 1980 through 2018, 65.3% of mass shootings occurred in private residences, but only 41.3% were family-related. Though falling, the overall rate of felony-related mass shootings was 33.5%. Given the nature of inner-city gang life, drug use, gang associations, et cetera, it is reasonable to assume that a significant number of residential mass shootings were due to felony circumstances. Women and children trapped in these neighborhoods or living gang-related lifestyles are part of the victim body count for in-residence mass shootings.

Some other data points worth pondering from this report:

We have reached out to the authors, and with luck they will share the entire database with us, which would give us some juicy multivariate correlation studies to make.

For now, any activist organization that is claiming a crisis of growing mass shootings simply doesn’t know what they are talking about, because, as is their practice, they do not use gold-standard data or perform rigorous analysis.

Let’s contrast this. Many of these activists rely on the Gun Violence Archive, which is largely a crowdsourced database from news reports back to 2013 (given that all US major news organizations had a web presence by 1996, a cutoff year of 2013 seems odd). As the authors of this paper note:

The authors of this paper correlated data from multiple sources (see below) and validated each using additional resources, such as filing public record requests to clarify details.

For now, in terms of “mass shootings” in total, this is the gold standard data.