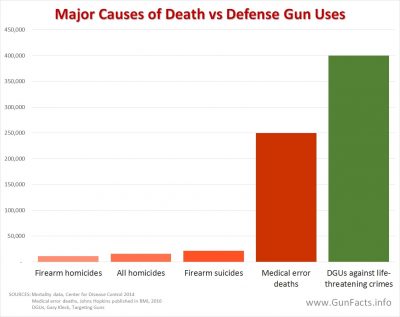 Next time your doctor asks you about guns, remind him that doctors are vastly more deadly.

Once in a while, an amusing perspective on guns and gore comes about. After debunking gun control myths, providing perspective is the Gun Facts Project’s second mission and our greatest joy. Perspective is valuable, and once people have a perspective about guns, crime, violence, danger and self-defense, their attitudes toward many things change. Especially about politicians.

And now, a change of attitude about their family quack.

Recently, Johns Hopkins – the same institute that contains the ever anti-gun Bloomberg School of Public Health – published a report estimating that 250,000 people are mistakenly killed by the healthcare system. This quarter of a million former humans constitutes nearly 10% of all Americans who croaked last year.

Now, this isn’t to say that your personal doctor is a careless and indifferent lout who is out to kill you. identical لعبة It just means he is 741% more likely to accidentally send you to your maker than you are to encounter Jesus after a traffic accident.

Gunning for A Cure

It also means his malpractice is 2,284% more likely to terminate you than someone with a gun. In fact, he’s 1,172% more inclined to accidentally off you than you are to off yourself with a firearm (suicide). العاب مباشرة على النت للكبار

Which brings up our first instance of irony. The gun control industry has repeatedly hijacked the medical community to campaign about the danger of guns. It isn’t just Michael Bloomberg buying the alleged minds of doctors at Johns Hopkins. It includes the somewhat faded Joyce Foundation and their perpetual canard of classifying bullets as pathogens. For quite some time, activist have lured medical professionals into committing critical thinking malpractice, doing everything from producing laughable criminology studies to asking how many guns you own, then lecturing you not to.

Guns, and Occasionally Doctors, Save Lives

The most interesting perspective though is accidental doctor deaths versus defensive gun uses (DGUs) that save lives. Though perhaps a bit dated, research by criminologist Gary Kleck indicated in the 1990s at least, that about 400,000 DGUs prevented death or serious injury from violent assault. 1 This means you are about 60% more likely to save your own skin using a gun to defend yourself than a doctor is to kill you because he was hung over during surgery, a nurse pushed the wrong pill down your throat, or the VA misdiagnosed your lung cancer for a bad cold (well, that last one is farfetched – you would never get a VA appointment soon enough to be diagnosed).

Doctors, heal thyself. Then, per your Hippocratic oath, do no harm. العاب مصراوى طاوله 31 This includes campaigning against the ability of people to defend their own lives as they see fit. Until such time as your body count drops well below those caused by homicides, then best that you attend to gout and not guns.