Just when you think people could not be more deceitful, they somehow manage.

And by “deceitful” I mean Giffords Law Center and their rather ridiculous state-by-state scorecard on gun control policy, wherein they attempt to convince an unwary public that guns lead to mayhem (when in fact it is Giffords lawyers that lead intellectual mayhem).

The History of Scorecards, Branding and Giffords Law Center

Gun control scorecards are nothing new. The formerly important Brady Center used to annually publish their bit of intellectual fraud in scorecard format. And, every year the Gun Facts project used to chew it up, spit it out, and publicly shame the crew at Brady (our last vivisection can be found here).

When the Bradys passed away and their legacy organization fell into disrepair, the scorecarding scam was adopted by the Law Center to Prevent Gun Violence (originally the Legal Community Against Violence). In taking over the project, they committed one of the most heinous sins against rational discourse ever seen.

When the Bradys did their scorecard, they at least documented how they graded alleged favorability of various gun control laws. Their system was nothing more than scoring highly the laws they liked (there was never any rigor in matching laws to efficacy).  But they were honest enough to allow anyone to peek under the sheets.

The Law Center to Prevent Gun Violence was not so burdened (perhaps due to the often commented-upon lack of intersection between lawyers and ethics). Despite my asking for their criteria twice, using different email addresses, they have refused to share their scorecard rubric; likewise, when former Congresswoman Gabrielle Giffords merged her Americans for Responsible Solutions with the law center to create today’s misinformation factory. There is little doubt (as you will soon see) that their approach is slightly less meaningless than a mugger’s claim of innocence.

What They Said vs. Reality 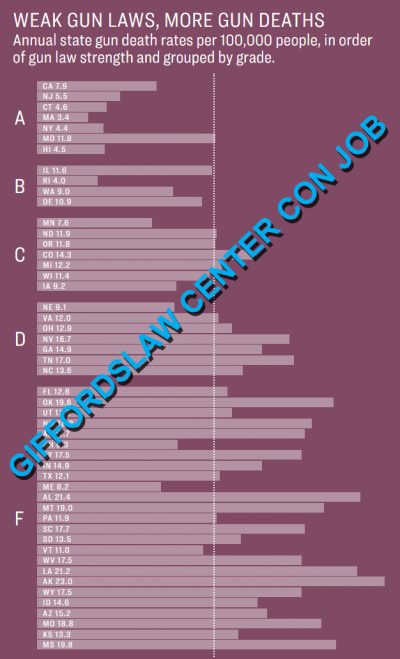 The airbrushed image that Giffords Law Center paints is that strong gun control laws lead to less death. On a professionally styled and illustrated web page, they present their rankings of states by the “strength” of each state’s gun laws, and the magically misleading “gun deaths” statistics (which we have been debunking for nearly 20 years, and which we recently reviewed).

The problems herein are a monument to agitprop. As noted above, the scoring rubric is unpublished and likely a cherry-picked charade. Contrast that approach to the one used in The Non-Brady Scorecard we produced a while back, where all was documented and there was a rational, metrics-based approach to scoring legislation founded on both offensive and defensive uses of firearms.

Scorecard schema aside, we encounter the first problem, which is that the law center appears to include all forms of gun deaths – legal interventions, justifiable homicides, etc. – into their “gun death” stats.

This means they also include suicides. Sigh. Here we go again.

More appropriate metrics focus on specific categories of mayhem, such as violent crime. 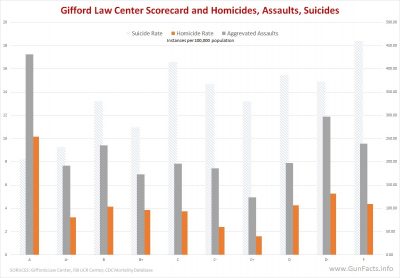 Which is why the Gun Facts project is here to help the Giffords Law Center out.

What most people at Giffords Law Center must have known, and thus must have intentionally concealed, is that crime is seriously higher in “strong” gun control states and districts.

In A+ rated states and the District of Columbia, the homicide rate was nearly triple the average of all other states (278%), and aggravated assaults were more than double (211%). Even rapes were 40% higher.

Here is the point. These topics have been openly and vigorously discussed for decades. The people at Giffords Law Center know these details, and how it impacts both policy thinking and public opinion. Yet they:

I guess we have to add one more item to the list of criminal offenses – the Giffords Law Center Scorecard.