One bit of persistent good news is that very few children die from guns in the United States. 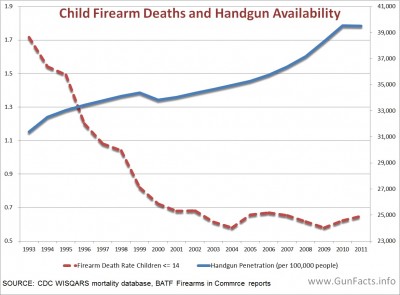 There is no need to recite all the other statistics about things that kill kids. We know that suffocation, drowning, poisons and other life hazards are more dangerous to kids than guns. The rate of child gun deaths remains low, about one kid per day out of a population of 61 million such critters.

But I had to look at the trends, because the Bureau of Alcohol, Tobacco and Firearms’ annual Firearms in Commerce reports show that the number of guns keeps increasing steadily. Certain policy groups promote that gun availability is a danger to your offspring.

Not the case. Peaking in 1993 (as most violent crime did), the rate of kids being killed with guns (regardless of the cause) has been falling fast, and leveling off around 2004 (around the same time that violent crime across the nation started to flat line).

The point is that people tend to be safe with guns, and even safer when they know kids are around. Get rid of a few gang members who leave their illegal and often stolen handguns at home, and the death rate might soon approach zero.