Having a degree in quantitative management, and thus having better-than-average knowledge about research methodologies, I was keen to spotting when a “research report” was likely a propaganda piece. It wasn’t until I started exploring gun control that I saw the perfect exploitation of rigged research and politics. The gun control industry is adept at sponsoring research designed to reach a conclusion and rightfully assuming the average voter lacked the diligence to determine if the research was sound or not. 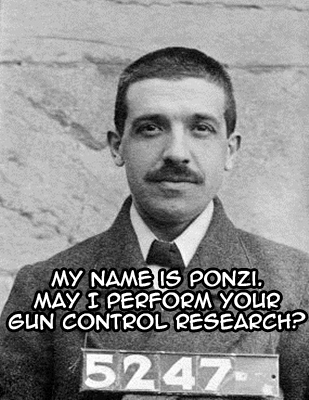 Sadly, the gun control industry has not stopped this unsavory practice.

A recent review of gun control related studies by Gary Kleck – the best in the business and a criminologist at Florida State University – shows quite plainly that the gun control industry con job still works, and why the media (a profession not known for their statistical prowess) parrots gun control industry headlines.

Kleck’s approach was simple and elegant:

Without filtering, 52% of the studies identified a link between gun ownership and homicide. When the bum studies were omitted, none of the remaining studies showed a gun/homicide correlation. As Kleck mildly phrased the results “The more methodologically adequate research is, the less likely it is to support the more guns-more crime hypothesis.”

There are many ways research is rigged. Some of the inappropriate processes I have witnessed include:

Inappropriate Raw Data: My favorite example is the KIDS database, which the gun control industry uses to tally children who get shot (the rest of the country uses the CDC injury and mortality databases, the gold standard in epidemiology). The KIDS database is voluntary, and the number of participating hospitals grows every year. Thus the raw number of reported incidents grows every year as more and more of the population is covered by participating hospitals. This makes it look like more and more children are victims on gun play, when in fact the numbers have been falling over the past decades.

Lack of Control: A lot of things can cause crime to go up or down. Controlling for as many variables as possible reduces the chance that your findings are purely coincidental. This is why the gun control industry backed studies rarely control for anything, or pick “control” variables they know in advance are meaningless. I can show that air conditioners cause rape because the rate of AC usage parallels the rate of rape … providing I don’t include any other controls.

Outcome Based Objectives: I recently deconstructed a bit of research popular within the gun control industry that studied gun death rates in industrialized countries. Not death rates by all means, just guns. Thus the study was polluted from the start as the tool of violence and suicide was assumed to be a determinate variable. Incidentally, this study was also a victim of too few control variables as well.

Irrational Methods: If you were studying a subject where things change over time, would you look at a point-in-time? You would if you wanted to obfuscate reality and perspective. The gun control industry is famous for applying the wrong mode of analysis to fit their desired propaganda.

Obfuscating Details: That study on international gun deaths was sadly amusing because (a) it claimed that 85% of women killed with guns are U.S. women, but inside the report noted that this was mainly a suicide issue. Maier’s Law of Research states that “If the facts do not conform to the theory, the facts must be disposed of.” This is what the gun control industry does daily. They would have Mister and Missus America believe violence is spiraling out of control due to a lack of gun control, when in fact violence has been rapidly falling since 1993 during a period of less gun control.

If you want to know more about gun control industry agitprop, get a copy of Shooting The Bull. I cover a lot of ground therein.