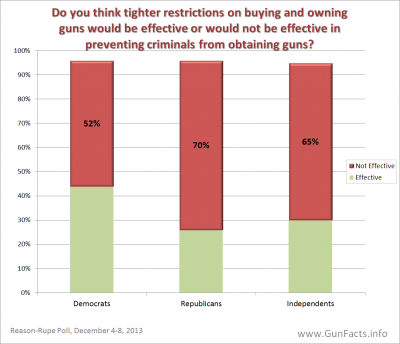 Fact: The Federal government once estimated that there were well over 65 million gun owners in the U.S. and more than 50% were handgun owners. 1 This number is generally considered low due to the reluctance of many to admit to a government agency that they own a gun.  Other estimates indicate that between 41% and 49% of U.S. households are gun-owning households.

Myth: People do not believe that the Second Amendment is an individual right

Fact: A Gallup survey confirms that 73% of Americans believe the 2nd Amendment “guarantees” the right to keep guns, and that a mere 20% believe it exists to enable state militias. 3

Fact: A Zogby poll 5 conducted after the big gun control initiatives of the year 2000 concluded that 75% of Americans believe the right to keep and bear arms is an individual right. In the same year ABC determined the rate to be 77%. 6

Fact: A CNN/ORC poll has 52% opposing more gun control, and a mere 46% who support it. 7 This agrees with a 2006 Rasmussen survey that found 52% of Americans did not believe more gun control is needed. 8

Fact: A 2014 Gallup Poll showed that fewer than half of Americans favored stricter gun control, which extended a long-term trend. Barely more than a quarter favor banning handguns (rendered a moot point by the 2008 Heller Supreme Court decision). 9

Fact: Americans believe that parents and popular culture are more responsible for violence in America than firearms.

Fact: A 1999 survey by the Associated Press showed:

Fact: A 2000 Zogby telephone survey of 1,201 adults concluded that, by almost a two-to-one margin, Americans prefer enforcement of existing laws instead of new and tougher gun legislation to fight crime. The same poll found that 68% of the public disagrees with cities suing gun makers for the criminal misuse of guns.

Fact: A December 2000 Zogby poll of 1,028 American adults showed that they felt enforcing current laws was the “best way to solve gun violence in America.”

Fact: Only 39% believe stricter gun control is needed, down from 43% in an earlier poll. 10

Fact: A survey in April 2000 by ABC News/Washington Post asked whether “passing stricter gun control laws” or “stricter enforcement of existing laws” is the best way to curb gun violence. Enforcement was preferred by 53% to 33%.

Fact: The Gallup Poll has been asking Americans this question since 1990 and in the 16 years thereafter, the number supporting stricter gun control has fallen from 78% to 46% and had been as low as 26% before the Sandy Hook Massacre. 12

Fact: Twice as many Americans currently reject the idea of a handgun ban, though a majority favored such a ban in 1959. 13 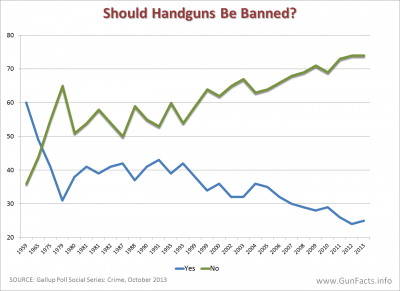 Fact: Only 28% of Americans believe handguns should be banned from private ownership and this rate is down from 60% when polling began in the 1950’s. 14

Fact: Fifty-one percent of Americans think more gun control is more likely to make it harder for law-abiding citizens to purchase a gun rather than keep guns out of the hands of criminals, people with mental illness and suspected terrorists. Only 38% disagree. 17

Myth: Most people think guns in the home are dangerous

Fact: 57% of Americans believe guns “protect people from becoming victims of crimes” while only 38% believe that guns “put people’s safety at risk.” 20

Fact: Gallup poll concludes that 63% of Americans believe having a firearm in the home makes it safer. 21

Fact: Sixty-eight percent of Americans would feel safer living in a neighborhood where they can own a gun rather than one where no one could have a gun for their own protection. 22