The Most Important Book Of The 2020 Election 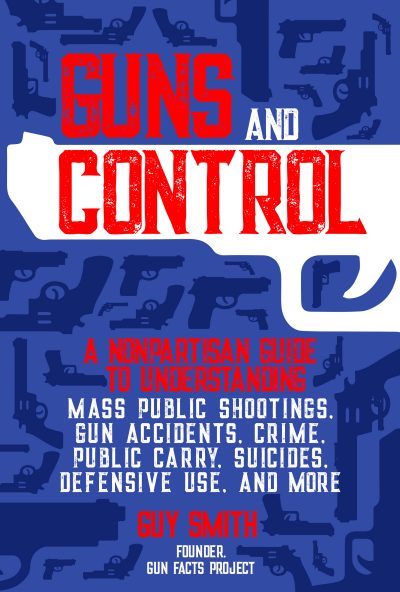 Guns and Control grants high-level perspectives—for example, that mass public shootings are a global phenomenon, occurring in nearly all developed nations—and explore details to understand the causes, and thus the possible and impossible cures, of gun violence-related problems. Was the push for de-institutionalization in mental health management a contributing factor to the rise in mass public shootings? Guns and Control will help readers find answers to such questions.

“This is an instructive book for those who want the information and want to make their own minds in the gun control debate. The science and empirical data concerning guns and violence are both rich and complex. Smith, as is his way, has made this complex topic easy to grasp and demystified where problems with guns do and don’t exist. He elucidates rather than obfuscate this issue with clarity and eloquence.”

“This book will delight and annoy both pro-gun and anti-gun factions. Guy Smith has always dealt in the facts without an agenda, and this time is no exception. If you don’t know who is lying or telling the truth about guns, this book will guide you to your own conclusions.”

A guided tour through data pertinent to these areas, with a tour guide who points out the sources, the uses and misuses – all in an easy to read manner.

About “Guns and Control”

What the public lacks is a clear, unbiased, broad perspective on the realities of guns, explained in simple, straightforward, and entertaining ways. Guns and Control will demystify these misunderstood aspects of who uses and misuses guns.

From project creator Guy Smith comes Guns and Control: A Nonpartisan Guide to Mass Public Shootings, Gun Accidents, Crime, Public Carry, Suicides, Defensive Use, and More. Non-aligned voters are often baffled by gun control. This book is designed to be a guide to thoughtful discussion; it arms readers with facts and observations behind the conflicting arguments, leaves emotional rhetoric to the pundits, and focuses on the thorny perspectives underlying the debate. Guns and Control will:

• Guide readers step-wise through each of the major gun control topics: mass public shootings, assault weapons, street crime, suicide, private carry, defensive gun use, gun availability, and more.
• Help readers gain the broad perspective and the full set of important, true facts.
• Inoculate readers against some of the more egregious misinformation.
• Help readers in formulating their own conclusions, not spoon feed them spin.

Guy Smith is internationally known as a gun control policy analyst. He is the founder and chief researcher at the Gun Facts Project. In twenty years as a policy analyst, Smith has contributed to public understanding of the realities of guns and their control through both secondary and primary research, occasionally breaking new ground on key topics (he personally conducted work mapping issues of mental health, psychotropic prescription medications and mass public shootings). In the past two decades, Gun Facts has been directly distributed to more than 165 countries around the world, and is routinely referenced in testimony, including that by Dick Heller, the namesake of the famous 2008 Supreme Court decision reaffirming the constitutional right to own a handgun.

See this section of the media resources page for some previous interviews with the author of Guns and Control.

A small collection of photos of Guy Smith, author of Guns and Control.