You have very likely stood next to someone in line at the grocery store who was carrying a concealed handgun. Multiple times. Perhaps in the same day.

A tally from the largest survey of gun ownership and usage produced some surprising data, including how people in may-issue states ignore a lack of permits.

We recently reported about the largest modern survey of gun ownership. From that, other researchers extracted data on public carry of firearms. 1

Key is that there is not presently a larger, more comprehensive collection of this information. And given its scope (55,000 member panel, over 4,000 respondents), it is the most accurate data available. 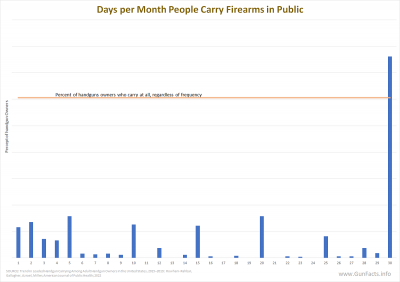 Interestingly, but unsurprisingly, most people who do carry don’t carry daily. They likely carry when the perception of public violence is high, or if they are traveling into either unknown territory or turf known to be dangerous. Though not covered in the study, I suspect more than a few people carry occationally just to remain proficient in wearing gear.

The resulting math, however, is quite revealing about the magnitude of public carry. The authors note that on any given day, about 30% of handgun owners carry. Those who make a daily practice of it is higher still at 38%.

Grinding these numbers and stats from the Census Bureau, we see that:

For contrast’s sake, there are only 665,380 patrol officers in the United States. 2 Given three daily shifts, and not bothering to factor in weekends, vacations, sick leave, time spent in courts, et cetera, that makes  221,793 officers, max, on the streets at any time. Also ignoring similar variables for civilians, the daily concealed carry community is about nine times larger than the police.

As one would expect, the rate of carry varies depending on the (pre-Bruen) permitting scheme for each state. It also depends on who gives a damn about the law.

The first surprising bit is that concealed carry in shall-issue states is higher than in permitless states (33.1% vs. 29.7%). One would instinctively (and incorrectly) assume that the lack of needing a permit would facilitate more people carrying. But many of the states that were early adopters of permitless carry were sparsely populated states with wide ranges of rural living, where cattle outnumber humans by orders of magnitude and crime rates are very low.

That gets us into the first …

People in non-metro areas don’t carry as often, presumably because of a perceived low crime rate. Most carry is done by people in and around cities (and we note population density matters in measuring this, so metro densities likely skew the data).

ASIDE: Some activist groups bemoan gun sales and public carry. The single best thing they could do to discourage both is to fund the police and reduce crime rates, because it is the perception of violent crime that motivates both gun purchases and public carry.

Women do not carry as often as men, but nobody debating policy can ignore that nearly a quarter of all people who do carry are ladies.

Also, a person’s education does not matter in who carries, except for those who never graduated high school. The carrying population is nearly evenly distributed among high school grads (29.2%), those with some college (35.5%), or with a bachelor’s degree or higher (30.1%). Aside from those who didn’t get out of high school, the percent who carry is largely aligned with the portion of the population that has each educational attainment level.

One exception is that people who have some college but no degree, or those who have an associate’s degree. They carry guns at rates higher than the population at large with that level of education (35.% carry and 28% have some college). No clear explanation but we might assume that they engage in livelihoods that put them in more compromising situations, or that lower finances have them living in more sketchy neighborhoods.

One valuable aspect of this survey is that the rate of people refusing to answer questions was low. Only one person refused to answer whether they did or didn’t carry. Others may have lied, but the data makes us think otherwise.

Slide up the chart about who carries in which state, and note that in both shall-issue and may-issue states, a lot of people admitted to carrying without having a permit (11.5% and 7.5% respectively). This is illegal activity, but they ‘fessed to doing it. When paired with the low rate of people (28 total) who declined to answer whether they did or did not have a permit, we can safely assume the responses are valid, and the response rates are very high.

Other research using crime data from states shows that people with carry permits almost never commit crimes, and their rate of violent crimes is statistical noise. Extrapolated, this means the 6,000,000 people who legally carry guns in public have nada do to with the 10,258 firearm homicides (2019). We know from data triangulation that 85% of gun homicides are street gang related or nexus. From a policy perspective, the priorities are clear.