There were two significant polls covering gun topics this week, but we’ll only focus on today. It is interesting for a few reasons, but important in part because now three of four trending polls have rough agreement concerning how many households have guns (though data indicates all these estimates are low)

For gun owners, Pew’s recent survey work belatedly agrees with the polls taken by ABC and Gallup, noting that around 42% of households report having at least one gun. The other firms score a bit higher.

But Pew used to say that only 33% of households had guns. They changed their survey technique to ask the question twice, presumably in different ways, and they believe this explains the change. It is interesting nonetheless that there is now some general consensus, ignoring the chronic female underreporting of gun ownership (even this Pew poll shows a three-point response gap). 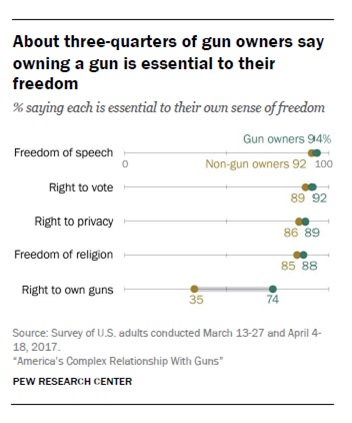 A key problem lies in the perception of “gun rights” and education. Notice that in terms of most civil rights, gun owners and non-gun owners are closely aligned in their beliefs concerning freedom. They part company over guns, with non-gun owners not believing that gun rights are essential to their own sense of freedom.

Of political note, 48% of Independents report owning, or living in a home with a gun. Independents are now the largest voting bloc in the country, outnumbering either Republicans or Democrats. Between this and the larger Republican gun owner base, I’m rather surprised that Democrat politicians would even mention gun control as it alienates nearly half of their swing votes.

The most surprising insight from the Pew survey was that a mere 33% of gun owners like the idea of permitless concealed carry, a system which is rapidly expanding in the United States. As we noted in some preliminary research, permitless carry does not appear to change crime rates, so the reluctance of gun owners is perplexing.

The second most surprising factoid is that a full 52% of non-gun owners “could see owning a gun in the future”. This appears to be largely skewed because many non-gun owners have owned guns in the past. These drop-outs explain the disconnection between gun ownership rates and support for gun owner rights. 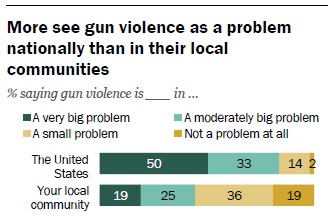 Pew confirmed media-influenced misperceptions about gun violence. As John Lott recently noted, most Americans live in counties where no homicides occur, with or without guns. But television news reports shootings where they do occur, broadcasting to the entire country. Entertainment media doesn’t help the misperceptions. As we noted long ago, 20 American cities have 21% of all homicides … and only 7% of the population.

I could complain about Pew’s methodology, but I won’t (they use a panel who do “self-administered” web surveys each month, which has a self-selection bias, but they built their panel via random-digit dialing, and that improves survey reliability).

That being said, Pew fumbled. Quoting their report “Respondents in the landline sample were selected by randomly asking for the youngest adult male or female who is now at home.” This is odd, and answering a question like “Are there guns in your home?” might lead to a miscounting, and on the low side.

What is interesting though is that the initial contacts are made using both English and Spanish. Participants who have such weak English skills are more likely to not be citizens, and certainly not raised with American sensibilities toward constitutional issues, like gun owner rights. We covered this quite a bit in the blog post Polling Pollution, which showed why the gun ownership rate among Americans is not declining.